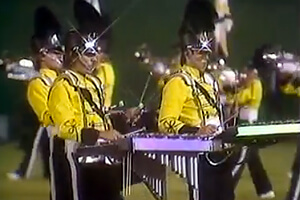 1977 Seneca Optimists
It's rare that one can mention a single word and corps fans know instantly not only what corps is being referenced, but which year's show as well. In the case of the word "parachute," that immediate reaction is to the 1977 Seneca Optimists. For this week only on the DCI Fan Network, you can purchase the Video Performance Download of the 1977 Seneca Optimists show for just $3.99 (regularly $4.99), as well as an Audio Performance Download bundle of Finalists from 1977 for just $15.99 (regularly $19.99). View all 1977 downloads. In 1977, the Seneca Optimists enjoyed their most competitive season, finishing in a tie for eighth with the Freelancers while moving up from 10th place in 1976. That earlier year was the first for the corps, a merger of the Seneca Princemen and the Toronto Optimists, the latter corps having finished 16th in 1975. 1976 was a good year for Toronto corps; both the Optimists and Oakland Crusaders advanced to the World Championship Finals. Of note, this is the only year in DCI history that two corps from the same city competed against each other at the Finals. The Optimists' 1977 show begins with Mahler's Seventh Symphony. What was really unusual was hearing the percussion section perform Mahler with a bongo and conga line. As was the rule during this time period, all percussion had to be carried onto the field. The corps marched four sets of two bongos throughout the show in addition to four sets of three congas, which took the place of a traditional triple tenor line. One can only imagine how heavy the sets of three congas must have been to carry around the field. If you love really old-fashioned LOUD drum corps brass, this is a show you want to hear. It's G-keyed bugles turned up to "11," particularly thrilling for fans during the concert standstill of "Selections from West Side Story." During the drum solo of "Magic Show," it's easy to appreciate how the concept of marching bongos and congas was implemented. However, most eyes at the time were drawn to the center of the field, where the brass section and color guard were congregating for the big visual parachute effect.
1977 Seneca Optimists performance excerpt.

Gary "Chops" Czapinski is a DCI Hall of Fame member, judge and visual designer who came to prominence through his earlier years with Santa Clara Vanguard, when he coordinated his efforts with fellow Hall of Fame member Pete Emmons to come up with the SCV signature "Bottle Dance" routine. Czapinski spoke of attempting to again catch lightning in a bottle by creating an identity for Seneca Optimists through a visual move that would have everyone talking. One day, while walking through an elementary school where he was conducting business for the company he was with at the time, he noticed students doing an exercise routine with a parachute, coordinating the routine to music. He saw how much fun the kids were having and a drum corps "Kodak Moment" was born. After the horns disappeared under the parachute during the drum solo, the members knelt down and started playing "Pippin" on their knees. The big opening statement was all the more effective because the audience couldn't see the horns from the perspective of the stands. Then the horns spilled out from the chute in a number of echelons, taking several seconds to fully clear from under the chute; kind of like watching a clown car being emptied out. Unfortunately, the corps would be in competition just one more year, taking 23rd place at the 1978 DCI World Championships. This week only, you can save on 1977 World Championship Audio and Video Performance Downloads on the DCI Fan Network. Buy the 1977 Seneca Optimists Video Performance Download. (Available this week only for $3.99. Regular price: $4.99.) Buy the Audio Performance Download bundle of all 12 Finalists from 1977. (Available this week only for $15.99. Regular price: $19.99.) Offer ends Monday, Feb., 21 at 8:30 a.m. ET.