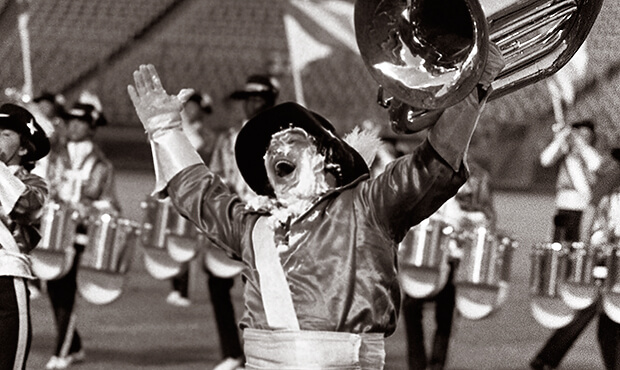 1978 North Star
A few corps were the result of successful mergers—Crossmen and Pioneer come to mind. Another such corps was North Star of North Shore, Mass., a corps that hit the Drum Corps International circuit in 1976 as a merger of several corps including the Cardinals, Reveries, Legion Vanguard and Blue Angels. In its first year out of the gate in 1976, North Star placed 30th at the DCI World Championships, moving up to 18th in 1977 and 10th in 1978. A ninth place finish in 1979 was followed by 11th place in 1980 and then 13th and 16th place finishes the final two years of the corps' existence. In its all too brief period of time in the activity, North Star became an audience favorite with a focus on well-recognized music. The corps' 1978 production started with John Williams' various themes to "Star Wars," screaming off the starting line to a disco version of the main theme with aluminum foil-like banners on poles spinning furiously around. Interestingly, while the brass section, drums and flag/banner bearers wore red blouses; members of the rifle line wore silver tops. After a brief "Cantina Band" segment, the main theme came back with the brass players pumping their fists in the air while playing their horns with their other hand. During a brief moment of musical silence, one could hear the banners spinning in the breeze. North Star's snare line was known as the "Chrome Wall" for being a rather impenetrable 11-man solid wall of drums. This was a huge number for the period, as it was most unusual for a corps to utilize that many snares. The line became one of the top drum lines the following year when the drums scored just 0.20 under Santa Clara Vanguard's line in total percussion, (18.50 to SCV's 18.70), the combination of scores from the two execution judges and the one percussion analysis judge. But in 1978, when the drum line was in the process of making its mark, it tied for third at the Finals on the sheet of one drumming execution judge and placed dead last on the sheet of the other execution judge. Stevie Wonder's "This Masquerade" was the second selection, bringing the rifles up front for numerous features. Maynard Ferguson's "Ol?©" followed as the concert standstill. (This was back when all corps performed a number that for the most part stayed in formation, with perhaps a single form change later in the piece.) In this selection, the corps chose to use the faster second half of the piece as a chance to move out of the concert production and make a series of form changes. After a drum feature that ended with a sequential roll traveling down the snare line, the corps got into the closer, the piece that most people will remember the most of any of the selections in the show; Stevie Wonder's "Sir Duke." The closer was memorable for a couple of reasons; one being a pie in the face taken by the contra soloist and the other being gigantic lips that appeared on the faces of the rifle bearers. This is a hard one to explain, so enjoy the clip in this article, because without seeing it, explaining it just doesn't make any sense. In retrospect, it's also hard to explain why the contra player was to take a pie in the face, but some things are perhaps best left to the idiosyncrasies of history. Note in the clip how the corps forms a pair of giant lips after the contra solo. Then the rifles turn around with the giant lips, which always generated a lot of laughter from the audience. This week only, you can save on 1978 World Championship Audio and Video Performance Downloads on the DCI Fan Network.