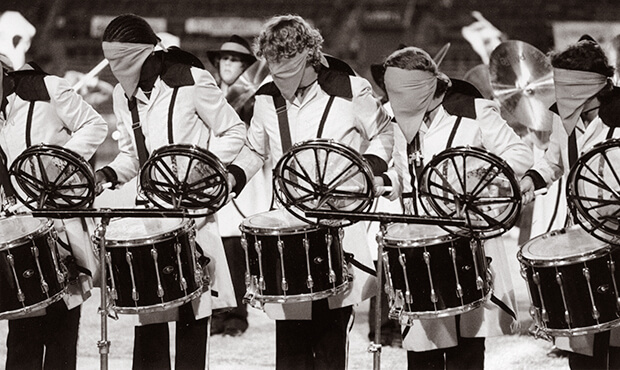 1983 Bridgemen
The Bridgemen was a corps that loved to be loved, and wasn't ashamed to show that desire to the audience. Regarded as the crown princes of drum corps, the organization made an impression on the activity far greater than the time the corps was on the field. The corps' fifth season in 1972 was DCI's first. After placing 11th and 9th at the first two DCI World Championships, the corps plunged into 26th place and didn't even attend any major DCI shows in 1975. Therefore, it was quite a shock to many when they showed up at the World Championship in 1976 with wacky long yellow trench coats, psychedelic headbands on their hats, and a cooler-than-thou attitude on the field that helped them pop into 6th place in Finals. Even more shocking was the entire corps falling to the ground at the end of the Finals show. Was nothing sacred? Well, perhaps not. Visual guru Bobby Hoffman came to the corps from the Blue Stars the year before and the Anaheim Kingsmen two years before. He had some intriguing ideas about what a drum corps could be if it was starting with a fresh attitude, and he convinced drum caption head Dennis DeLucia and others to go along with the radical look and demeanor. (To read Dennis' recounting of "How the Bridgemen Became the Bridgemen," check out this Fanfare column from 2003.) The corps' highest finish came in 1980, when it finished in third, only 0.55 out of first place. Three years later, in 1983, the corps placed at the Finals for the last time, finishing 11th. Bridgemen's 1983 show was largely based on the music of American jazz great Duke Ellington, starting with "Duke Ellington Suite," which included such hits as "Caravan," "It Don't Mean a Thing if It Ain't Got That Swing" and "Take the 'A' Train." Bob Meyer's "Waiting for Godo" (recorded by the U. of Miami Jazz Band; and yes, the spelling is correct) featured a typically wacky visual moment with a dancing bird taking center stage. It didn't really fit the music and seemed more like it was inspired by a moment of reckless free association, but that sort of unexpected thing had become an expected Bridgemen trademark.
Performance excerpt of the 1983 Bridgemen.

Joe Zawinul's "Black Market Juggler" served as the drum solo for the second year and was easily the heart of the show, largely due to the excitement generated when the snare drummers pulled blindfolds over their eyes and marched forward toward a row of Roto-Toms. Even though the drum line didn't match the prior three years of being declared the top line in DCI, this effect has long been ingrained in the minds of fans as the quintessential Bridgemen drum line moment. Music of Duke Ellington closed out the show with the soulful "I Got it Bad and That Ain't Good" and a short and peppy rendition of "C Jam Blues," with a reprise of "Don't Get Around Much Anymore" and one last full corps fall at the Finals. The next two seasons saw the corps slide to 14th and then 26th before going inactive in 1986. Coming back to the field with a volunteer staff in 1987, the corps finished 35th in its last season of DCI competition. Glimpses of the Bridgemen mystique are still witnessed in exhibition performances by the Bridgemen Alumni corps, which started in 2005 and became an annual production at shows like the DCI Eastern Classic in Allentown. For a few minutes each year, fans get to relive a little bit of what made Bridgemen the Bridgemen. This week only, you can save on 1983 World Championship Audio and Video Performance Downloads on the DCI Fan Network. Buy the 1983 Bridgemen Video Performance Download. (Available this week only for $3.99. Regular price: $4.99.) Buy the Audio Performance Download bundle of all 12 Finalists from 1983. (Available this week only for $15.99. Regular price: $19.99.) Offer ends Monday, Aug. 1 at 8:30 a.m. ET.