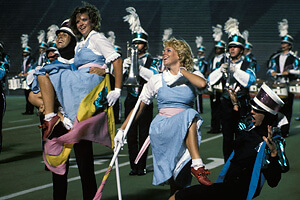 1986 Sky Ryders
On August 12, 1939, MGM's "The Wizard of Oz" received its world premiere at the Strand Theater in Oconomowoc, Wis., just 50 miles from the city of Madison. Now proclaimed by the Library of Congress as the most watched motion picture in history, the film was originally a failure at the box office. Exactly 47 years to the day of the film's world premier, the 1986 DCI World Championships kicked off in Madison. The culmination of that week saw the Sky Ryders achieve their highest placement ever. Fans found Sky Ryders to be a fun, hard-hitting pop/jazz corps with a powerful horn line during its initial ascendancy through the ranks in the late 1970s. In 1982, the corps first made it into the DCI World Championships Finals, finishing in 10th, and then placed 12th the next year. After slipping out of Finals the next two years, the 1986 season saw the corps finish in its highest placement ever in DCI competition, 9th place. Sky Ryders were to place in the Finals three more years, 1987, 1988 and 1991, finishing 12th each time. The 9th place 1986 show was simply known as "Wizard of Oz Highlights," based on Harold Arlen's melodies for the film's musical score. The show also picked up some impressive General Effect marks on the judges' scoring sheets. Consider this: The corps bested 10th place finalist Phantom Regiment by 2 points, but had a 3.60 advantage over Regiment in the General Effect caption alone. For this week only on the DCI Fan Network, you can purchase the Video Performance Download of the 1986 Sky Ryders for just $3.99 (regularly $4.99), as well as an Audio Performance Download bundle of Finalists from 1986 for just $15.99 (regularly $19.99). View all 1986 downloads. There were many rather literal references to the movie, both musical and visual throughout the production. At the beginning, the tornado hitting Dorothy Gale's house is heard in the swirling rapid scales of the horn line. The color guard was dressed as Dorothy and reacted accordingly to the many thrills and splendors that were to follow. Early in the show, the Wicked Witch of the West rides her bicycle amidst the yellow brick road flags, only to fall prey to being caught underneath a falling house. Other quite obvious visual nods to the movie included the rifle spinners playing the role of flying monkeys, six guard members as the Scarecrow during "If I Only Had a Brain," and the Wicked Witch waving a "SURRENDER DOROTHY" banner just before Dorothy throws a "bucket" of water on her, causing her to scream, "I'm melting! I'm melting!," as she disappeared behind the front ensemble bass drum.
1986 Sky Ryders performance excerpt.

The tune "Over the Rainbow" is synonymous with the movie. Naturally, it's the ending statement of the show, with cloud flags being unfurled to become giant rainbow flags and a hot air balloon lifting off to take Dorothy to the place that no other place is like. At the very end, we find out she did make it home. There's something pure and innocent about this show. It's a reminder of a bygone era in drum corps when simple pleasures came into our lives like a fresh breeze off the ocean, allowing us to sit back and just enjoy drum corps for what it was, a fun evening out among thousands of other like-minded friends who weren't looking for anything beyond wholesome entertainment. The year after "The Wizard of Oz" was released, Thomas Wolfe's novel, "You Can't Go Home Again," was posthumously published. While Dorothy was able to go home, drum corps moved on and evolved into the more sophisticated and artistic activity it is today. The Video Performance Download of this show is worthy of purchase if for no other reason than to allow corps fans to "go home again." This week only, you can save on 1986 World Championship Audio and Video Performance Downloads on the DCI Fan Network. Buy the 1986 Sky Ryders Video Performance Download. (Available this week only for $3.99. Regular price: $4.99.) Buy the Audio Performance Download bundle of all 12 Finalists from 1986. (Available this week only for $15.99. Regular price: $19.99.) Offer ends Monday, March 7 at 8:30 a.m. ET.