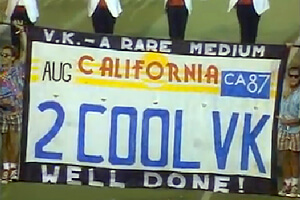 1987 Velvet Knights
Ask any corps fans that've been around awhile what groups come to mind when they hear the words "fun and drum corps," and "Velvet Knights" (or more likely, "VK") will no doubt be one of the names that instantly rolls off their tongues. The "2 COOL VK" attitude permeated everything about this corps, from its musical selections to its uniforms and costumes and the laidback surfer dude attitude it projected with a not-so-laidback glee. An example of the corps' carefree attitude was in 1990, at the DCI World Championship parade through downtown Buffalo, N.Y. The parade of corps ended up inside what used to be known as Pilot Field, Buffalo's minor league baseball stadium. Inside were thousands of corps fans waiting to enjoy the exhibition performances of the winners of that year's Individual & Ensemble Competition. Just as the parade ended and everyone who wasn't yet in the stadium started to go inside, VK's buses pulled up and the entire corps, in full uniform, got out to march in the parade. Sometimes officials didn't know what to do regarding this unique demeanor. One year, DCI Contest Director Bob Briske stepped out to the field as the drum majors were entering the field for the announcement of the Finals scores. He stopped the VK drum majors from bringing their folding lounge chairs onto the field, amidst a very audible audience reaction in support of the drum majors. The casual attitude that permeated everything VK was seen in the corps' uniform; red Converse tennis shoes, baseball caps and a cummerbund under a casual white blazer. And perhaps nowhere was this attitude better reflected than in the costumes of the Sex Cymbals, (the corps' name for them), the cymbal line whose image would have been at home in a James Bond movie as Bond Girls. Velvet Knights first made the Finals in 1984 and maintained that honor through 1990. After four years out of the top 12, the corps shut down. 1987 was a year that perfectly captured the personification of everything VK, and it was also the corps' highest placement ever in its eight years as a World Class Finalist. The corps' score of 90.0, good enough for a tie for seventh place with Star of Indiana (and just 0.40 under the Madison Scouts), was the first time VK would break 90. This was the first of four "Magical Mystery Tour" shows, taking the corps on a musical journey to China, Brazil, Africa and back home to California throughout the course of the production.
Performance excerpt of the 1987 Velvet Knights.

The show opened with four casually dressed, suitcase-toting tourists embarking on a voyage to the in-your-face sound of Lennon and McCartney's "Magical Mystery Tour." The powerful brass sound was quite typical of the corps…always laying it on the line in lieu of subtlety. No one in the stands was complaining. "Chinatown" featured a brief visit to a Chinese New Year's festival before hopping over to Ary Evangelista Barroso's "Brazil," a Hollywood-style pop jazz classic that demonstrated what the corps was best at doing. A jazz band turned up the heat in Club Rio, with the Sex Cymbals serving drinks and hors d'oeuvres off the platters of their cymbals. "African Medley" was essentially an original drum solo, opening with the beat of primal drums and a verbal sparring match between two African chiefs. In "Beach Boys Medley," the corps returned to the land of sun, surf and sand. A small glimpse of "California, Here I Come," the "NBC Chimes Festival" and "Hooray for Hollywood" led into a soprano bugle solo accompanied by a tanned bathing beauty in a white bikini and white high-heeled shoes, a costume that was not pre-approved by conservative columnist Phyllis Schafly. Echoing the feelings of many in the audience, "I Wish They All Could Be California Girls" embodied everything there was to say about the essence of VK. For one thing, the guard members wore snorkels, scuba masks and scuba fins and after diving into the ocean, got up and did a kick step routine ahead of the corps' company front, still wearing the fins. (This is a move that you should not try at home!) A large "2 COOL VK" banner was unveiled and the audience freaked out in enthusiastic thanks for the experience of watching a drum corps show that was created for one purpose…to entertain. This week only, you can save on 1987 World Championship Audio and Video Performance Downloads on the DCI Fan Network. Buy the 1987 Velvet Knights Video Performance Download. (Available this week only for $3.99. Regular price: $4.99.) Buy the Audio Performance Download bundle of all 12 Finalists from 1987. (Available this week only for $15.99. Regular price: $19.99.) Offer ends Monday, March 28 at 8:30 a.m. ET.