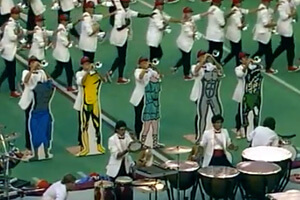 1988 Velvet Knights
Velvet Knights' (VK) eighth place 1988 production was the second of four "Magical Mystery Tours" the red baseball-cap-wearing corps led fans on between 1987 and 1996. Read about the first such show from 1987. As was so typical of VK during that era, it was impossible to watch a VK show without breaking into an exuberant smile. Had the corps' enthusiasm been able to have been bottled and sold in drug stores, Starbucks may have never become a global marketing phenomenon. After a brief 44-count bombastic introduction of the Lennon and McCartney "Magical Mystery Tour" theme, the corps was off to Greece for an enthusiastic rendition of "Zorba the Greek," with five double-tonguing soprano bugler soloists standing behind cutouts of statuesque physiques. During the accelerando after the musical break, the audience eagerly clapped along and even succeeded in keeping up with the Greek "Opa!" celebration. "Malague?±a" allowed show coordinator Bobby Hoffman to dig into his wacky imagination and bring us some of the most memorably funny moments yet witnessed on the field. A vivacious Spanish maiden attempted to get the attention of the soprano soloist calling out the bullfight fanfare, but then became attracted to a cruel matador, with the visual accompaniment of members of the guard dressed as toreadors. The matador's attention was soon drawn to the arrival of his nemesis, a bull, inexplicably wearing two pairs of the corps' red Converse sneakers. Of course, the bull had to get the better of the self-worshipping matador, jubilantly raising its front legs in celebration upon his conquest. The fans in the stands screamed their shouts of approval when the bull lifted its right hind leg and expressed its lack of respect for his vanquished foe.
1988 Velvet Knights performance excerpt.

The corps then jumped across to Africa for the drum feature, "African Medley," with two ceremonially robed tribal chiefs taunting each other, with their tribal brethren backing them up with cheers and dance. Naturally, the most logical thing to happen next was for PeeWee Herman to come riding onto the field atop his bicycle! PeeWee got tied up to two long sticks carried by four color guard members and got carried away to a human stew kettle, with one of his transporters sprinkling a salt shaker on him along the way. The two chiefs came together in cooperation to stoke the fire as giraffes scampered across the plains. (Well, eight guard members wearing blow-up giraffe pool floats.) Twelve red afro-wigged snare drummers beat out a resolution of victory on 12 large tribal drums. "There's No Place Like Home" and "America the Beautiful" brought us back to the good old USA, with Betsy Ross bidding us welcome and a mellophone-playing George Washington crossing the Delaware with mace-bearing guard members providing the rowing. Betsy and Uncle Sam unveiled the red, white and blue flag Betsy had been working on. The parade procession of "Yankee Doodle Dandy" included a dancing stars and stripes top hat, which really wasn't out of context as it would have been in every other drum corps show that has been presented since the beginning of the activity, or will be presented until the end of time. With VK, one suspended one's sense of logic to enjoy the fun and spectacle. "You're a Grand Old Flag" brought out the Statue of Liberty to join George Washington and Betsy Ross in a high kicking advance to the stands forward of the full horn line company front, the three characters wearing scuba fins that reprised the routine from the previous year's "I Wish They All Could Be California Girls" closer. As the giant "2 COOL VK" California license plate was unveiled, a corps member ran across the field hoisting a kitchen sink over his head, as a bikinied-California beach beauty popped out of the top hat. Somehow, it was all so very appropriate, so very logical, and so very VK. This week only, you can save on 1988 World Championship Audio and Video Performance Downloads on the DCI Fan Network. Buy the 1988 Velvet Knights Video Performance Download. (Available this week only for $3.99. Regular price: $4.99.) Buy the Audio Performance Download bundle of all 12 Finalists from 1988. (Available this week only for $15.99. Regular price: $19.99.) Offer ends Monday, Feb. 13 at 8:30 a.m. ET.