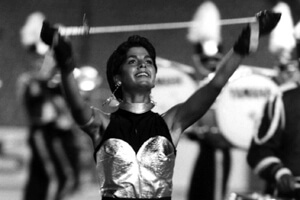 1991 Blue Devils
When some fans think of Blue Devils' 1991 show, "Conversations in Jazz," they focus on this being the one corps in BD history since 1975 that placed in 5th, just 0.10 out of 6th place. That is unfortunate, as 20 years later, this show remains one of the most edgy productions ever put on the field. Those who had difficulty locking into the music in 2010's "Through a Glass, Darkly" might find it a romp in the park after listening to this 1991 show. This has long been one of my favorite musical productions ever put on the field, combining two of my favorite jazz albums in one gloriously out-there program. Don't let the placement fool you; this is a show you should have in your audio library. Interestingly, it's arguable that the entire production was influenced by the music of Hungarian symphonic composer Bela Bartók. It's been written by jazz historians that Johnny Richards' "Adventures in Time," written for the Stan Kenton Orchestra and originally titled "A Concerto for Orchestra," was inspired by Bartók's famous work of the same name. The reasoning is that Richards treated the jazz band as a single soloist, much as Bartók had done with the orchestra. Then, to top it off, the show finished with a couple of sizeable selections from Don Sebesky's "Bird and Bela in B-flat," a whimsical imagination of what would have transpired had jazz sax virtuoso Charlie "Bird" Parker met composer Bela Bartók. The music of Kenton's 1962 album "Adventures in Time" has enjoyed many incarnations on the drum corps field. "Aperçu" and "Commencement" are especially hard hitting, with a sense of forward propulsion kicked into overdrive right off the line with an almost tribal explosion of footwork from the flags on the front sideline.
1991 Blue Devils performance excerpt.

But it's the Sebesky that filled the last two-thirds of the show and stretched the audience's ears. The 1979 "Three Works for Jazz Soloists and Symphony Orchestra" was originally recorded with famous jazz soloists and the Royal Philharmonic Orchestra, its clinically named "2nd Movement" and "3rd Movement" becoming the heart and soul of the production. The heart was "2nd Movement," a brooding ballad filled with a palpable pathos that was quite elongated, as far as drum corps ballads typically went. This ballad was anything but quiet, though, growling ferociously before collapsing in on itself. "3rd Movement" is my personal favorite and the selection that is excerpted in the accompanying video clip. Here Sebesky was channeling Bartók to the nth degree, and the savage brutality made blood boil throughout the stadium. A classic BD soprano jazz riff that seemed to be practically impossible to play, led into a segment where ornate almost-Rococo horn flourishes piled atop one another. Then after a series of brass stabs pushed to the end amidst a sea of white color guard wings and squealing that must have had the lips of the brass players screaming for mercy. Back in 1991 I wrote about this production, "Afterward, some fans had no idea what had hit them." I believe that sentiment is still valid today. This week only, you can save on 1991 World Championship Audio and Video Performance Downloads on the DCI Fan Network. Buy the 1991 Blue Devils Video Performance Download. (Available this week only for $3.99. Regular price: $4.99.) Buy the Audio Performance Download bundle of all 12 Finalists from 1991. (Available this week only for $15.99. Regular price: $19.99.) Offer ends Monday, Sept. 19 at 8:30 a.m. ET.