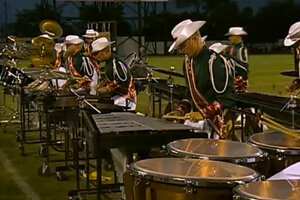 1998 Madison Scouts
Following the success of the blistering Spanish-flavored jazz of both their 1995 "A Drum Corps Fan's Dream" and their 1996 "A Drum Corps Fan's Dream: Part Dos," the Madison Scouts took a detour in 1997 with the equally successful nautical theme of "The Pirates of Lake Mendota." In 1998, upon circumnavigating the globe on the high seas, the corps returned to the hot jazz style of those two earlier seasons. Though none of the melodies were Spanish on the surface, the sixth place show of "Power, Pizzazz and All That Jazz" owed more of its character to those "Dream" shows than that of the year before. Of particular interest percussion-wise is that the tenor drummers all played snare drums in the opener and all but three snare drummers moved to tenors for the middle production. Snares and tenors were on their own instruments for the closer. A short percussion introduction led into a fleur-de-lis drill formation for the equally short, brash opening of Yuii Ohno's "Lupon," based on a Japanese cartoon theme song. Ohno may well have been inspired by fiery Spanish jazz, as the piece certainly had much of the character of the most-loved works from the Scouts' prior repertoire; screaming sopranos, volleys of notes in the mid voices, syncopated percussive chords in the baritones and a thumping walking bass line in the contras. Add in the hard-driving drums and a strong full-color guard rifle line that was years ahead of the P90X workout program, and this became an opener that encouraged fans to scream their approval while watching the guard's transitions to all flags and the brass section ending in the form of a smaller fleur-de-lis. The tranquil musings of Edvard Grieg's orchestral piece, "Prelude: Morning Mood" ("Morgenstemning") from "Peer Gynt Suite No. 1," contributed the melody to "Swingin' Pete…Sweet," a jazzy update of the classic orchestral standard. A lone mellophone player uttered the opening phrase from the Grieg original and was soon joined by the jazz background chords of the rest of the horn line, leading into a walking bass motif that itself led into the full-corps statement of the melody much as Grieg conceived it.
1998 Madison Scouts performance excerpt.

Next came a lively rendition of "In the Hall of the Mountain King" ("I Dovregubbens Hall"), with some contemporary bluesy mallet vamping adding to the contemporizing of the popular melody. The visual highlight of the entire show was when the cluster of soprano players moved cross-field, riding the ebb of an undulating lateral wave made by the rest of the horn line. (Think of a side view of a surfer riding the bottom of a wave instead of the top.) A short standstill "park-and-blow," a trio of soprano player and fireworks unleashed from the tenor drums directed the piece to its joyous conclusion. The jazz-rock fusion of Paul Hart's "Remembrance," (from "Concerto Grosso," a suite of five parts in memory of various people), was brought back from the corps' ninth place 1990 show. Starting fairly subdued and reflective and slowly building up steam amidst a long series of sustained background chords, the piece suddenly changed character as the mood kicked into overdrive, leading into a sense of joyful proclamation and ending with a full horn line company front. This week only, you can save on 1998 World Championship Audio and Video Performance Downloads on the DCI Fan Network. Buy the 1998 Madison Scouts Video Performance Download. (Available this week only for $3.99. Regular price: $4.99.) Buy the Audio Performance Download bundle of all 12 Finalists from 1998. (Available this week only for $15.99. Regular price: $19.99.) Offer ends Monday, March 5 at 8:30 a.m. ET.