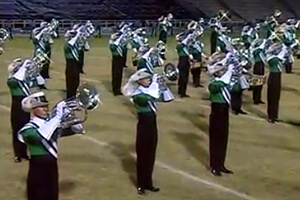 2000 Cavaliers
When the Cavaliers tied the Cadets for the 2000 Drum Corps International World Championship, it was the third time in five years and the second year in a row that there was a tie for the number one position. The 2000 season was the first year DCI corps were allowed to use brass instruments pitched in any key, and it was rather interesting to see the Cavaliers do so well that year, as the corps, playing on the more traditional G bugles, finished alongside the Cadets and in front of the Blue Devils, the first two corps to make a switch to B-flat horns. The show, "Niagara Falls," was based on Michael Daugherty's concert band work of the same name. Daugherty, one of the most creative contemporary composers who freely brings jazz and rock elements into his symphonic music, has a knack for making modern music accessible to the masses. Though his "Desi" work appeared in Blue Devils' 1996 show, he was virtually unknown to drum corps audiences at the time of this show. According to the composer's own liner notes, the piece is a "musical ride over the Niagara River with an occasional stop at a haunted house or wax museum along the way." He goes on to explain that the four tones of the main phrase correspond to syllables in "Niagara Falls, and [are] repeated in increasingly gothic proportions." The reference to gothic proportions meant that the four-note theme was presented in continually more grandiose settings, though a case can be made that it refers to the definition of the word that refers to mystery or even barbarity; not that that's a bad thing. Six of the most barbaric repetitive stabbing brass chords ever heard on the drum corps field opened the show, followed by five more and then four more, just for good measure. The color guard, dressed nautically in blue horizontally striped shirts and black stocking hats, frequently utilized flags with ample amounts of blue to convey the sense of water. Visual drill formations heavy on undulating arcs presented an impression of waves cresting on the rocks of the Niagara River just before plummeting over the edge of the falls.
2000 Cavaliers performance excerpt.

The second movement of the show, based on an original composition by brass arranger Richard Saucedo, started quite slowly and calmly with long, sustained notes, building up to a huge searing and foreboding hit that would have given Daugherty a run for the gothic willies. Huge, massive chords reverberated around the University of Maryland's Byrd Stadium upon the sudden cut-off. The next part of the show returned to the Daugherty material. The composer wrote that the pulsing rhythm in the timpani and lower brass "creates an undercurrent of energy to give an electric charge," a tip of the hat to the electric turbines at the power plant just beneath the falls. The tension rapidly building in the music was palpable. One just knew something big was about to happen. The "rock-out" section was a no-holds-barred, throttle back, screaming blast of sonic fury that spun dangerously close to total musical anarchy. It was particular fun to watch the brass players lay back as the drummers let their heads bob as they pounded the bouncing drumheads into submission. Cutting loose here was a little bit of a character shift for the Cavaliers, who up to this point in their history had been pretty straight-laced in the eyes of fans. The final movement, seen in the accompanying video clip, tied the musical themes together with a non-stop flurry of kaleidoscopic geometric drill evolutions, including the second incarnation of the corps' famous spinning "diamond cutter" routine that was introduced the year before. This week only, you can save on 2000 World Championship Audio and Video Performance Downloads on the DCI Fan Network. Buy the 2000 Cavaliers Video Performance Download. (Available this week only for $3.99. Regular price: $4.99.) Buy the Audio Performance Download bundle of all 12 Finalists from 2000. (Available this week only for $15.99. Regular price: $19.99.) Offer ends Monday, Feb. 6 at 8:30 a.m. ET. [pic_2] Michael Boo was a member of the Cavaliers from 1975-1977. He has written about the drum corps activity for more than a quarter century and serves as a staff writer for various Drum Corps International projects. Boo has written for numerous other publications and has published an honors-winning book on the history of figure skating. As an accomplished composer, Boo holds a bachelor's degree in music education and a master's degree in music theory and composition. He resides in Chesterton, Ind.