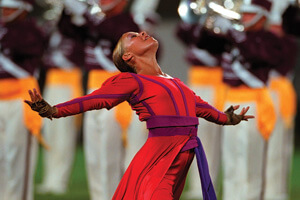 2003 Cadets
"Our Favorite Things" was the Cadets' present to drum corps fans, inspired by past hits from corps that pushed the envelope in sophistication and entertainment over the years, including Santa Clara Vanguard, the Madison Scouts and the Cadets themselves. The pre-show was based on the popular hit, "My Favorite Things," from "The Sound of Music." Visually, quite a bit of curvilinear drill moved into a traditional left side entrance from a front built along a yard line, much like in the very early years of Drum Corps International and before. This set up Clifton Williams' "Fanfare and Allegro," performed by Santa Clara Vanguard in 1972, 1984 and the DCI Championship year of 1973. When Williams first wrote the work in 1954, it was generally regarded as being too difficult for many bands to perform. But when the composition won the first American Bandmasters Association Ostwald Award for best original band literature in 1956, Williams' career took off and elementary school band director and Vanguard founder Gail Royer decided one day it would be the perfect piece for Santa Clara Vanguard to prove what was musically possible on the football field. Sometimes dissonant, sometimes martial in character, mostly modern and individualistic in nature, the piece forever changed contemporary wind literature in the concert hall and in drum corps. The Cadets added their own brand of flex drill and quick-paced evolutions, updating the visual nature of the piece. Malague?±a was already an established trademark of the Madison Scouts, who played the piece in 1963, 1965, 1978, 1980, 1981, 1996 and the DCI Championship year of 1988. The Cadets' version combined traditional elements of the piece with versions by the Stan Kenton Band, a symphonic rendition by Morton Gould and Percy Faith's dance-tinged version.
2003 Cadets performance excerpt

For their rendition visually, the Cadets borrowed the Scouts' huge rotating company front while heading into the main melody, followed by members of the corps having fun and letting off some steam – Look for drummers and horn players performing while lying on the ground. The following "park-and-blow" segment showed that the Cadets' horn line could blast with the best. Perhaps no work better defined the surge the Cadets took on the way to several DCI World Championships than Ron Nelson's "Rocky Point Holiday," first performed by the corps in 1982 and again for the corps' Championship-winning year of 1983. Originally scored by Nelson to emphasize the brightness of the concert band timbre, the blazing yellow and orange flags helped convey the brightness of the Cadets' own horns and the glimmering mallet keyboard instruments that Nelson exploited in the original. It was during this closing number that the Cadets brought out their trademark "G" drill form, which, as in the early 1980s, employed the use of an arrow to point toward a new era of Cadets supremacy and fearless artistic innovation. Ending with the late Hall of Fame member George Zingali's famous "Z-pull" from those earliest DCI championship years, the show capped off a smorgasbord of musical and visual quotes from DCI's past. This week only, you can save on 2003 World Championship Audio and Video Performance Downloads on the DCI Fan Network. Buy the 2003 Cadets Video Performance Download. (Available this week only for $3.99. Regular price: $4.99.) Buy the Audio Performance Download bundle of all 12 Finalists from 2003. (Available this week only for $15.99. Regular price: $19.99.) Offer ends Monday, Aug. 29 at 8:30 a.m. ET.