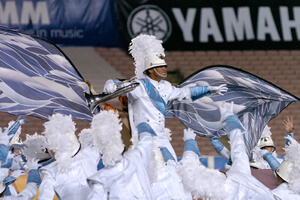 2007 Phantom Regiment
In 2007, a year before Phantom Regiment stunned the activity with the corps' awesome "Spartacus" show, "On Air" had a number of special moments of its own that charmed and captivated the audience. Perhaps the most unique musical moment to this show inspired by birds was the very opening moments, when echoing rivulets of keyboard percussion overlapped each other in such a way to create a haunting effect that convinced many that non-acoustic techniques were being employed. Christopher Deane, a composer who taught at the University of North Texas with the corps' percussion head Paul Rennick, originally wrote "Vespertine Formations" as a marimba quartet. Rennick, one year after his percussion line won the first of three DCI World Championship High Percussion Awards (2006, 2008 and 2010), explained the purely acoustic compositional techniques that brought this most intriguing effect to life in the following DCI.org article. Read "Phantom Regiment's percussion goes to the birds" On their uniforms, the brass and percussion members wore baldric sashes and wrist gauntlets that incorporated the feather-like design of the opening flag silks that were employed as bird wings by the color guard. While the female members of the guard were attired in muted variations of brown, the male guard members had bright colored fringe of various colors attached to their costumes. "1000 Airplanes on the Roof" by Philip Glass grew out of the percussion intro. This minimalist-inspired work is based on the repetition of small themes that rapidly developed into a powerful flock of avian muscle. The work was one of the more daring pieces on the field that year, based more on rhythmic drive than melodic development, the effect being one of birds being something more than cute, feathery creatures that gently wake us up with their playful chirping on a summer morning. After the brass section formed the corps' chevron logo on the field, percussion keyboard hints of the opening "Vespertine Formations" closed out the work as the birds came to rest. Two horns replicated the "Flower Duet" from Leo Delibes opera, "Lakm?©," one of the most beloved works in all of opera and originally performed on stage by two soprano vocalists. The staff had said this movement represented two birds wooing each other during courtship. The female guard members added feathered headgear during this piece, picked up from behind the eight clusters of walls that dotted the field, which necessitated some nimble navigation by the rest of the corps. (This plumage would have looked much better on the head of Princess Beatrice at the recent royal wedding than the hat she wore that has become one of our newest Internet memes!)
Performance excerpt of the 2007 Phantom Regiment.

After a large, sequential sabre toss down the line of 20 guard members, fans were treated to a male and female bird coming together and making an avian love connection. It ended with the male bird doing a charming victory jig after becoming the chosen one for his mate of his choice. It was such a brief moment, yet it brought a sense of charismatic humanity to our avian brethren. Black headdresses and black wings came out in Prokofiev's "Suggestion Diabolique," presenting the more threatening side of the winged creatures, not unlike the demeanor of the hostile birds in the classic Alfred Hitchcock film. These were ominous, menacing fowl; capable of dive-bombing anyone who got too close to their nest. The finale from Stravinsky's "Firebird" closed the show, starting with the ever-building chorale and moving into the grand fanfare, with bright red, orange and yellow "Firebird" flags lifting the show up from the earlier peril of the bird attacks and pointing the way to a rebirth of new life. As the "birds" poured out from a tight block mass, the flock rapidly followed the leader, as if they all lifted off from a large tree branch. After quickly changing direction as flocks do in mid air, the brass ended in the corps' trademark wedge with members in the front thrusting out their straightened legs, as if spreading their wings in defiance and victory. This week only, you can save on 2007 World Championship Audio and Video Performance Downloads on the DCI Fan Network. Buy the 2007 Phantom Regiment Video Performance Download. (Available this week only for $3.99. Regular price: $4.99.) Buy the Audio Performance Download bundle of all 12 Finalists from 2007. (Available this week only for $15.99. Regular price: $19.99.) Offer ends Monday, May 23 at 8:30 a.m. ET.