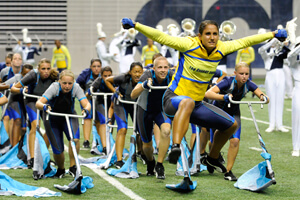 2008 Blue Stars
Today is the middle of the 98th Tour de France, the grueling 21-stage endurance test that is the most famous bicycle race in the world. That makes this a good time to look back three years to Blue Stars' "Le Tour…Every Second Counts," a show inspired by the preparation and running of the ride that was first held 105 years earlier. Until placing 13th at the 1980 World Championship Finals, Blue Stars had been the only corps besides Santa Clara Vanguard to place in each of the eight prior Finals competitions. In the first two years of DCI's existence (1972 and 1973), Blue Stars placed second and third, respectively. After competing for much of the late '80s, '90s and into the 2000s as a Division II & III corps, Blue Stars made their return to World Class competition in 2006 placing 14th. 2008 marked the first time in nearly three decades that the Wisconsin corps made it back into the Finals competition, ultimately placing eighth. "Le Tour…Every Second Counts" is primarily based on music of French composers, including Faur?©, Satie, Debussy, Saint-Sa?«ns, Widor and Ravel. Segments of the show were referred to as "Passion," "Intensity," "Endurance" and "Teamwork." The corps went all out to create the mood and visual imagery of the event, starting with the spandex-clad and helmeted color guard members (wearing colorful bicycle race team uniforms and soon spinning corresponding-colored flags) stretching out in the end zone to the warm-up music of Faur?©'s "Pavane." Some of the most apparent references to bicycle racing included bicycle handlebars attached to flags, yellow jerseys appearing on the guard reflecting those worn by the overall Tour de France leader, and yellow flags playing off of the jerseys. After bicycle wheels were rolled onto the field, the first big musical hit came when the brass and drums formed the spokes of a wheel, with the guard forming the rim. It was obvious from this first major statement on, that the corps had successfully navigated a huge jump in sophistication and degree of difficulty over the past season.
Peformance excerpt of the 2008 Blue Stars.

The soul of the show was the tender "La Vie en Rose," a French melody made famous by the most popular French singer of all, Édith Piaf. It would sneak in during other parts of the show as well. This week's video clip starts with the haunting backfield introduction to Saint-Sa?«ns' "Organ Symphony." After forming the corps' trademark giant star formation, a bicyclist crouched over a real bike made an appearance during the week of the World Championships only. (I was at the rehearsal outside Bloomington, Ind. when the corps first added the effect. Someone may have forgotten to tell the bass drummers, because one did the most amazing back flip I've ever seen while accidentally backing into the racing cyclist.) The cyclist passed through the throng of race fans at the finish line, leapt atop the victory podium, and raised his arms in enthusiastic celebration. While the gesture was a nod to the end of the Tour de France, it's arguable that it just as easily reflected the corps' excitement and relief for making it back into the World Class Finals after 28 years. This week only, you can save on 2008 World Championship Audio and Video Performance Downloads on the DCI Fan Network. Buy the 2008 Blue Stars Video Performance Download. (Available this week only for $3.99. Regular price: $4.99.) Buy the Audio Performance Download bundle of all 12 Finalists from 2008. (Available this week only for $15.99. Regular price: $19.99.) Offer ends Monday, July 18 at 8:30 a.m. ET.