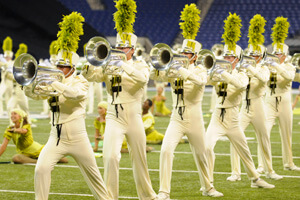 2009 Carolina Crown
"The Grass is Always Greener" was the most successful show in Carolina Crown's illustrious history, launching the corps into second place at the 2009 DCI World Championships. The corps was suspected to be a contender during its 20th anniversary year when it topped fellow Eastern corps the Cadets eight shows in a row in late June and early July, after the Cadets won the first four match-ups. Taking first place in Brass and Music Ensemble at the World Championships Finals, the corps solidified its ongoing reputation as one of the brass lines to beat, helping the corps come within 0.55 of winning it all. Perhaps more than any other corps, Crown proved that a corps' pre-show performance was now indispensable to the actual judged portion of the show. Sneaking onto the field to Copland's "The Promise of Living," the brass players amply demonstrated their body sculpture training and seemed to delight in being continuously molded into pliable forms by some unseen giant hand. Quite intriguing was how the volume and intensity built up to a grand company front push as the corps was announced, only to have the front quickly disintegrate. The staff had commented that the show was about yearning for an ideal that may be unapproachable, striving optimistically to always have it better than our real everyday lives. Along the way, we were transported from our idyllic fantasy to fantasies that were anything but idyllic. The quirkiness of the body movements partially represented equally quirky beings we would find on the other side. Naturally, the romance that is also found would be forbidden, and "The Promise of Living" would not be realized until the end of the show.
2009 Carolina Crown performance excerpt.

After the relative normalcy of Respighi's "Church Windows," the quirkiness went into overdrive during Elvis Costello's "Puck One." (This remains the only Elvis Costello work ever performed on the DCI field of competition.) The unwieldy movements generated lots of giggles from the audience, as heads, arms, torsos, legs and whatever else could be contorted on the human body was wrapped around the production like a pretzel. Things got downright ominous in "Sensemaya," seeming to warn of the forbidden love soon to be expressed by the two main color guard characters in "Over the Rainbow" and "There's a Place for Us." When all but the two characters froze in place for several seconds as only the sound of a dainty celeste wafted across the field, the effect was beyond chilling. It was one of the most simple-yet-perfect moments of pure emotion ever brought to the field. Carter Pann's "Slalom" kicked things back in motion, a continuous swirl of jubilant and hope that dissolved into the gradually evolving and gently curved reappearance of the company front in "The Promise of Living," with brass musicians yet to step off pointing to the heavens as if realizing that the best times are approaching, and what's more, were always in front of us. Indeed, the grass always appears to be greener elsewhere, whether it is or is not. This week only, you can save on 2009 World Championship Audio and Video Performance Downloads on the DCI Fan Network. Buy the 2009 Carolina Crown Video Performance Download. (Available this week only for $3.99. Regular price: $4.99.) Buy the Audio Performance Download bundle of all 22 World Class corps from 2009. (Available this week only for $23.99. Regular price: $29.99.) Offer ends Monday, Sept. 12 at 8:30 a.m. ET.