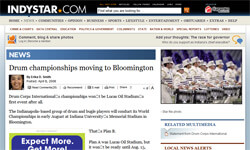 Dave Frick, chairman of the Indiana Stadium and Convention Building Authority, who is overseeing the construction of Lucas Oil Stadium, is quoted about the status of the new stadium where the 2008 Championships were originally scheduled to take place from Aug. 7-9.