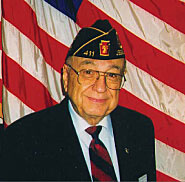 Dr. Almo J. Sebastianelli
Co-founder of the all-age drum corps organizing body Drum Corps Associates, Dr. Almo J. Sebastianelli, passed away on Wednesday, Feb. 25, at the age of 93. Sebastianelli served in the Army Air Corps during World War II and later in the United States Air Force. Practicing dentistry for more than 60 years, he was known simply as "Doc" to friends and family. According to a blog post by Drum Corps Associates public relations director Tom Peashey, "Doc was a walking encyclopedia of drum corps. He was huge in the American Legion and a major part of the Legion National Championships for decades – quite literally since he returned from World War II." As drum corps and contest sponsors began to drift away from the American Legion as an organizing body for drum corps competitions in the 1960s, Sebastianelli was one of a handful of individuals determined to help corps survive under the newly formed Drum Corps Associates organization, even if it meant a diminished role on the national level for his beloved Legion. "DCA has lost one of its founding fathers and Drum Corps has lost one of the giants of the activity," said Gil Silva, president of Drum Corps Associates. "For over 60 years, Doc has lived and breathed drum corps through his involvement with the American Legion, the drum corps activity and show sponsorships. He was chairman of last year's Parade of Champions in Scranton at 93 years of age. His leadership and tireless efforts for the activity will be sorely missed by all." Funeral arrangements: Viewing – Friday, Feb. 27, 4 p.m. to 8 p.m. Louis M Margotta Funeral Home 511 Church St. Jessup, PA 18434 570.489.2230 Funeral – Saturday, Feb. 28, 11:30 a.m. St. Mary's Assumption Church 516 3rd Ave. Jessup, PA 18434 570.489.4726 Read more about Sebastianelli. Photo courtesy Tom Peashey, Drum Corps Associates.