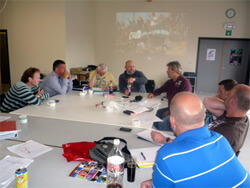 Drum Corps Europe (DCE) officials have been busy preparing for the start of the organization's competitive season which is only two weeks away. At DCE's annual "Judges College" in Dadizele, Belgium last weekend, adjudicators from Holland, Germany, Belgium, the United Kingdom and Thailand came together to brush up on their skills while attending sessions focused on the basic principles and philosophy of the DCE judging system.

"It was the most intense training so far," said Bob Thomas who in addition to judging for Drum Corps International in the summer, serves as the DCE director of education. "The DCE education committee, Bruce Vrancken (adjudication manager), Paul Morgan (music caption head) and Jim Lauver (visual caption head) continue to improve the judging organization with all their efforts."