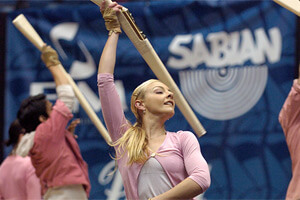 Santa Clara Vanguard
This past weekend's Winter Guard International (WGI) World Championships in Dayton, Ohio featured several winter color guards that are connected to currently active Drum Corps International organizations. On April 10, at the University of Dayton Arena, Santa Clara Vanguard's winter guard almost pulled off a repeat of its 2009 championship win with its program "Letting Go." Having won the prelims and semifinals in its class, the group finished second in the finals competition with a 97.50, just 0.35 points behind Onyx of Dayton. This brought to an end a remarkable two-year undefeated streak for the Vanguard that had carried the group up to the very last day of the season. A good omen for the organization's summer drum corps is that a third of the members of the winter guard are marching in this year's corps. CrownGUARD, the Independent World Class guard ensemble of Carolina Crown, scored 92.0 to finish in seventh place with its 2010 program "The Last Dance." Also making the Independent World Class finals was Opus 10, the winter guard sponsored by the Blue Knights. The group finished in 15th place with a score of 82.25. In addition, the Academy's winter guard progressed into the semifinals, and a guard from Revolution performed in the Independent World Class prelims. 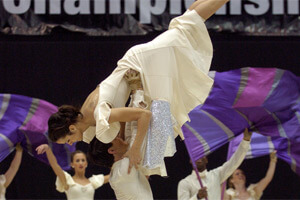 CrownGUARD
In the Independent Open Class, a guard sponsored by the Blue Devils advanced to the semifinals competition and Opus 10 fielded a second group, which introduced many younger members to the activity. The Bluecoats' Artistry In Blue finished in 7th place after the A Class finals on Friday afternoon. Drum Corps International and WGI are strategic partners and do much to promote each other's activities. WGI has long served as an important training ground for color guard members of drum corps, and many of the more than 200 guards competing in Dayton this past weekend had members who have previously marched in drum corps or will be in corps this summer. Read more about the results of the 2010 WGI Color Guard World Championships on WGI.org. Photos courtesy Winter Guard International.