Drum Corps International, the event producer and sanctioning body for the world's most elite and exclusive marching music ensembles for students, along with the Indiana Convention & Visitors Association (ICVA) and Indianapolis city officials, announced Tuesday that it will move its headquarters to the city of Indianapolis and bring its World Championships to Lucas Oil Stadium beginning in 2008. The milestone announcement was made on the 50-yard line of Indianapolis' RCA Dome in a press conference that was attended by various city officials, business leaders and Indianapolis media outlets including four television stations and several print publications. President and CEO of the ICVA Bob Bedell, Drum Corps International Executive Director Dan Acheson and Indianapolis Mayor Bart Peterson all spoke at the event. Carolina Crown set the background, performing portions of their 2006 competitive program to introduce the media to a world-class drum corps ensemble. 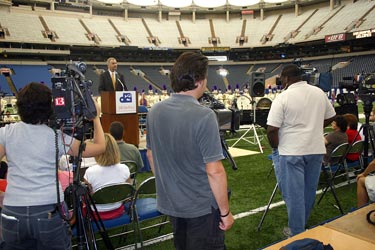