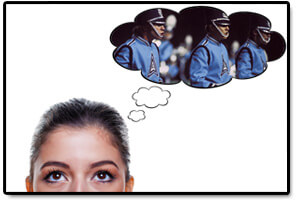 Ben G. Hey everyone, I know I have been beating this Chase Community Givings thing to a pulp, but it is way too important to not too. Please, if you haven't voted yet go to this site http://march5.co/ Here you can vote for 4 DCI drum corps, along with DCI itself. Again, this will take less than 15 seconds of your time, and it means a LOT to me personally.

Charles F. Ya know what has a nice ring to it as we approach the 2011 drum corps season? SPIRIT OF ATLANTA! Now hopefully they put the delta back in it's appropriate place, as well.

Samantha R. our air conditioner isn't working at work. Its ridiculously hot but it makes me smile because it reminds me of drum corps when the air conditioner on the busses stopped working. oh, memories :)

Gerardo C. Impulse Drum & Bugle Corps is still my number one band i want to march with. if i dont make then then i will tryout for Santa Clara Vanguard cadets :)

Ryan H. You know what I should start? A radio station that only plays Drum Corps music, but mostly just Drum cadences. Even if it wasn't that successful, I would listen to that stuff all dayyy :)

Jim B. If you've ever enjoyed watching a drum and bugle corps show, please consider voting for these five drum corps charities in Chase Community Giving... voting ends tomorrow. Thanks! www.march5.co We are focused on empowering and engaging more young people in musical activities through their participation in and appreciation of marching music. HURRY - voting ends May 25,2011. March 5 - Chase Community Giving

Devon E. i got so tan at Drum Corps this weekend! LOL JK it was just dirt.

Jacob M. My first official day of drum corps was amazing! I'm not in pain and I still have energy to keep going. I still miss my friends.

Karim J. My sole regret from my limited run of drum corps / percussion ensemble... not taking that self discipline needed as a member of the corps into my own day to day life. Why can't I do for myself what I was willing to endure for the rest?

Karen K. Congrats to my son Aaron who was named Freshman Member of the Year in his high school band. Thanks to the drum corps community for encouraging him to take his playing and marching to a new level.

Jacob M. I won't feel like I'm out of high school until I get back from Drum Corps since I marched during high school. But I already miss my friends and family.

David P. I thought summer without drum corps was supposed to be relaxing?

Andrew E. Just finished up my first drum corps repair of the summer....crushed tuba bell from the Cavaliers.

Steven M. Drum and bugle corps people are the BIGGEST dorks, I mean I'm a dork, but come on!!!