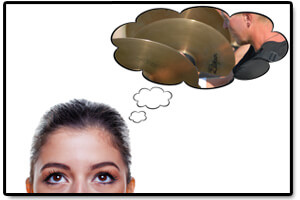 Kentster F. The good old days when Drum Corps were good!!! I spent summers traveling all over Canada and USA competing. I was a young young boy. I miss those days...happiest days of my life. Especially when we won Canadian championships...standstill division....i often wondered where all those guys r now. YouTube: Old School Drum Corps Veterans Day Salute

Lee M. My right arm is more muscular than my left. I know this because my left sleeve won't stay up. Thanks, Drum Corps.

Tyson H. You know, with reality TV picking up on everything, there really should be a reality show about Band or Drum Corps. I mean. Abby Lee Miller (Dance Moms) ain't got nothing on some of the band directors I've seen.

Casey J. So before I even decide if I want to think about drum corps next summer I need to find out from my boss if it's possible I can go.

Christine H. This is so true! Stolen from Abby! Wishing there could be a little more drum corps in the world: Everyone would be physically fit, everyone would get 3-4 meals a day made by people who truly care about them, theme days would be considered national holidays, and everyone would receive motivational and powerful information for their lives almost everyday....

Stephanie S. My level of productivity right now is minus five. Can I puhleaze just play drum corps instead of do homework??

Jacob W. Im more committed to staying in shape now that I've aged out. Not having drum corps to go back to is forcing me to keep myself in shape.

Christina B. I have amazed myself with all the drum corps trivia I know. Just wrote my forensics speech and only referred to youtube thrice. :P I am such a band geek

Brad S. Doing laundry at a coin wash. Oh drum corps how I miss you!