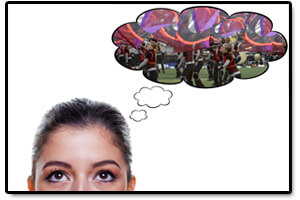 Alberto R. left as a snare drummer came back officially playing trumpet in a world class drum corps ...... and actually happy that im doing that

Jamie S. It's time to shop for more apparel from yet another drum corps---SCV! Congratulations Dustin and Brian!!

Doug B. Congratulations to Miles and Evan for receiving contracts for First Flugelhorns in Drum Corps International's "Crossmen". Way to go guys ! Now off to the haberdasher with Evan's dad to get some bigger hats !

Deirdre R. One of my favorite songs EVER (I want it sung at my funeral) and hearing a drum corps do it only makes it more powerful. Just heartbreaking. YouTube: Madison You'll Never Walk Alone for Vanguard Allentown 2009

David A. Wow never thought I would be able to play from the show that got me into drum corps. Gotta love Bluecoats '07 closer!

Adam R. "Marching band is like fast food. Its taught fast, less time do to anything, quick, easy, cheap and satisfying. But Drum Corps. is gourmet baby. There's nothing that takes more man hours and a standard of perfection like it anywhere. " -Aaron Goldberg

Korey M. Thinks that all drum corps arrangements from this day forward shall be scored trumpets 1-3 mellos (how ever many parts they get) korey 1 Bari 1 bari2 and tuba

Craig C. Sometimes we get so used to a drum corps version of a song we forget where it came from. Stan Kenton Malaguena 1965...groove on my friends

Allen G. What would happen if every college had their own competitive drum corps?

Jeffrey O. concert was awesome tonight. the audience loved us. feels good when the audience goes crazy....like the old days of drum corps.