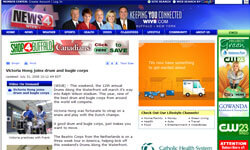 News reporter Victoria Hong joins drum and bugle corps WIVB (Buffalo, N.Y.) news reporter Victoria Hong, recently spent some time with the Netherlands' Beatrix, now on a three-week tour of the United States and participating in the Drum Corps International Summer Tour. Hong suited up in a Beatrix uniform with a snare drum to learn what it takes to keep the beat with one of Europe's top corps. Watch the video below. 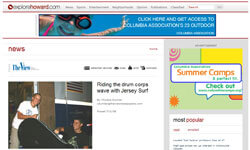 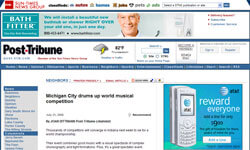 Michigan City drums up world musical competition The Gary (Ind.) Post-Tribune reported on the upcoming kickoff of the 2008 Drum Corps International World Championships which will take place at the beginning of next week in Michigan City, Ind. Michigan City will host a special opening ceremony on Monday, Aug. 4 and then the Open Class Quarterfinals on Tuesday, Aug. 5. Read the article on Post-Trib.com. 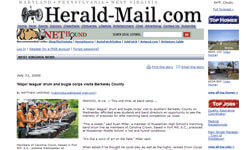 'Major League' drum and bugle corps visits Berkeley County The Herald-Mail recently caught up with Carolina Crown members as they made a stop in Berkeley County, S.C. Local high band students shared their thoughts in the report after watching the group rehearse and perform. Read the article on Herald-Mail.com 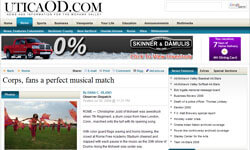 Corps, fans a perfect musical match The Utica (N.Y.) Post Dispatch covered Drums Along the Mohawk on July 30 in Rome, N.Y. The Cavaliers and Jersey Surf took top honors in the World and Open Classes at this DCI Summer Tour event, which celebrated its 30th anniversary this year. Read the article on UticaOD.com