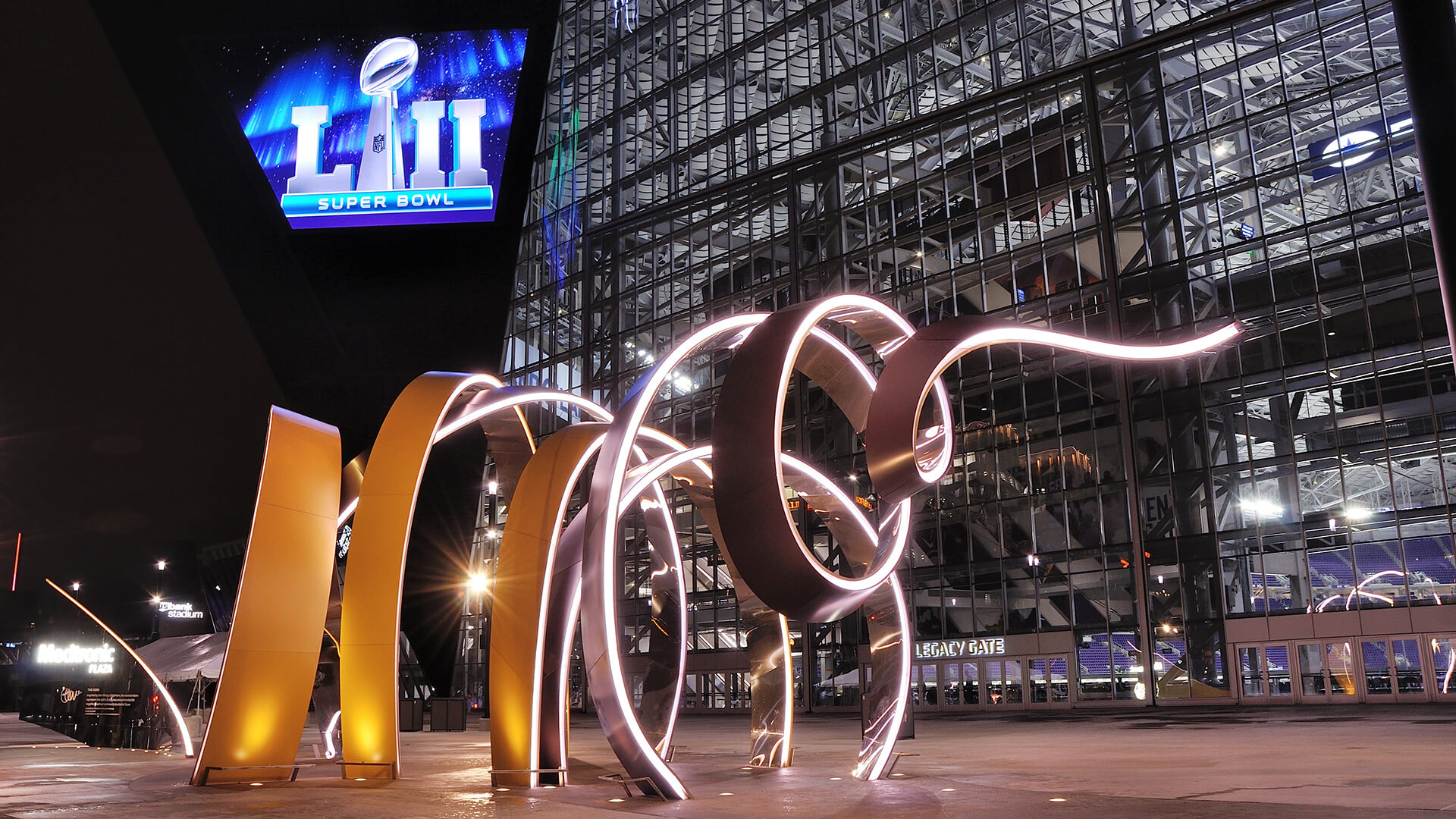 Many drum corps members performed with the University of Minnesota's marching band at halftime of Super Bowl LII in Minneapolis. Photo by: Shutterstock.com

If you were among the millions who grooved along to the Super Bowl LII halftime show last night, you probably noticed the marching band that accompanied Justin Timberlake throughout the show.

The 320-member “Pride of Minnesota” Marching Band played alongside the pop superstar on the field of U.S. Bank Stadium in downtown Minneapolis, and marching within the ranks of the University of Minnesota ensemble were nearly two dozen current and alumni members of Drum Corps International’s World, Open and All-Age Class corps.

“I think a lot of people watch football and if they see a marching band doing something cool, that interests them,” said band member Patrick Murphy who also marched as a member of Pioneer in 2017. “There are definitely drum corps members out there who got their first taste of marching music by watching an event like this when they were young. Just to get that exposure out there is great, not only for our band, but also for the marching arts and the drum corps community as well.”

While the halftime show only lasted 13 minutes, the journey to get there for Minnesota’s most prominent marching band was much longer.

As the fall marching season got underway and the Super Bowl crept closer, the members of the band were intrigued by the possibility of being involved with the halftime festivities. 2018 marks 26 years since the Pride of Minnesota last performed at the NFL’s biggest game, when Super Bowl XXVI came to the now-demolished Metrodome in Minneapolis.

Taking their Super Bowl destiny into their own hands, a few of the students took it upon themselves to launch a social media campaign to make the dream a reality. The initial call-to-action asked people to get behind the band on social media using the hashtag #UMNmarchwithJT. In a matter of hours, there were hundreds of Tweets from friends, family, alumni, and the Midwestern marching community, all pulling for them to take the field in February.

With a groundswell of local support in place, a promo video was produced asking the general public to join in on the action. The video blew up, and since being posted on October 27 has been shared more than 1,000 times and viewed by more than 43,000.

Do YOU want to see #UMNmarchwithJT during the #PepsiHalftime at #SBLII? Help us let Justin Timberlake and the NFL know just how READY we are by liking and sharing this post! Minnesota Super Bowl 2018 Pepsi Pepsi Halftime Show

Posted by The University of Minnesota Marching Band on Friday, October 27, 2017

The calculated strategic approach continued and various NFL, Super Bowl hosting committee, and halftime production contacts were approached, working to convince them of the energy the band would bring to the show. The outreach even made its way onto the local news.

“In the midst of working on three halftime shows in the middle of the marching season, we took time in rehearsal to create a photo of a ‘SB 52’ drill set taken with a drone, to show that we were truly serious about our commitment to the show,” said tuba player Owen Luterbach. “Several weeks later at the band’s end-of-season banquet our head director Betsy McCann made the announcement that we would be taking part in Super Bowl LII!”

Putting the show together

Rehearsing for an event like the Super Bowl packs a lot of pressure and intensity into a very short amount of time.

Students began practicing and learning the music weeks before coming together for their first rehearsal in January. “It was a post-season déjà vu moment that when we looked around at each other in rehearsal, and it seemed almost too surreal for what we were about to embark upon,” said Kyle Tsuchiya, Minnesota’s center snare and also a recent age-out member of the Bluecoats.

With around two weeks until game day and having to keep details about the upcoming performance under wraps, the band finally began rehearsals on campus with the halftime production crew. Choreography and movement was added, along with a steady stream of small changes and tweaks. Rehearsals eventually expanded significantly to include hundreds of dancers sourced from the Twin Cities area — including the Minnesota Vikings Cheerleaders.

The multitude of performers moved seamlessly across the practice field each night, living their normal lives during the day and meeting secretly for rehearsals when the sun went down. Little did anyone know outside the music department what historic things were going on inside that practice facility.

With one week left, it was time for dress rehearsals inside U.S. Bank Stadium. Band members made the necessary academic sacrifices to miss classes for the eight-hour practices that allowed them to fit all the pieces of the halftime production together, including moving stages, pyrotechnics, and eventually the talents of Justin Timberlake.

The band also had a recording session with members of Justin Timberlake’s team, who assisted in getting the musical selections blended perfectly with the electronics that accompany the track. Timberlake’s trumpet player and music arranger, Dontae Winslow, inspired the young musicians with motivational takeaways in between takes, urging a lifetime involvement in the arts, whether they become a lawyer, teacher, or performer.

The buzz of Super Bowl Sunday was felt all around the Twin Cities, despite frigid single-digit temperatures that made it the coldest on record.

Director McCann had the chance to be on the field during halftime, helping manage the flow of performers who streamed out from underneath the U.S. Bank stands to their preset staging as the halftime show began.

“What an experience this was for the group,” McCann said. “There was so much pride and passion on their faces as they performed alongside an artist that they admire so much.”

Marching through the transition from Timberlake’s “Cry Me a River” to his Grammy-award winning “Suit and Tie,” were members of the band’s drum line. They met Justin Timberlake at centerfield, where their stick tricks and rudimental intro led into the chorus where the band joined in with horn flashes of their own.

Watch the Pride of Minnesota's halftime performance on YouTube.

After a tribute to the late Minneapolis music icon, Prince, a large portion of the band traded in their flags and instruments for reflective props, taking their role as dancers in the song, “Mirrors.” The stadium’s spotlights beamed down on the members that encircled the stage, sending shimmers around the stands that mesmerized onlookers.

The finale brought the return of the tuxedo-clad band during “Can’t Stop the Feeling,” to end the show with the entire cast on the field. The hundreds of dancers got the audience members on their feet and clapping along to the catchy tune, as illuminated bracelets painted rainbow colors across the entire stadium.

What band members kept referring to as a surreal experience culminated with striking a pose and absorbing the moment, where the magnitude of people cheered in approval before it was time to run off the field.

With Super Bowl LII in the history books, band members were ecstatic to represent the university’s home state in addition to their own Drum Corps International units on one of the biggest stages in the world.

“It’s an incredible opportunity for us to showcase the quality music education and performing arts opportunities that are here in our home state,” McCann said. “It’s also important that people who are not familiar with us can see and realize this is who we truly are. Everyone in the band was so incredibly professional through the whole process and performed everything absolutely to their best level possible. It was just clear that we were here to perform, do great, and get the crowd going — Just awesome.”

Posted by The University of Minnesota Marching Band on Sunday, February 4, 2018

The staff and members of the Pride of Minnesota Marching Band represent a wide variety of World, Open and All-Age Class DCI corps.

Izaak Mendoza was a member of the Blue Knights from 2008-2010, serving as drum major and percussion soloist. He continues his involvement with the drum corps activity as social media manager and video producer for Ascend Performing Arts. Mendoza has written for various marching publications and arranges percussion parts for several high school and college programs. He is pursuing a dual Master's Degree in Public Policy and Business Administration from the University of Minnesota, where he marches on the snare line of the Pride of Minnesota Marching Band.