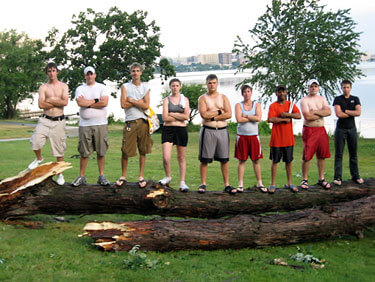 This picture was taken after a freak storm in Madison, Wis., during the summer of 2006. The drum line decided to have a sectional at a park by Lake Monona when in the middle of it, a crazy storm came up, and the drum line members had to run for their cars. My roommate and I for the summer had to miss the sectional because of a long drive home.

After the short storm filled with wind and crashes of thunder and lightning, the drum line went to inspect the damage and found a fallen tree. In defiance of the storm they posed on the tree and the picture was taken. This was just one of the many memories made around Madison with the 2006 Capital Sound drum line.