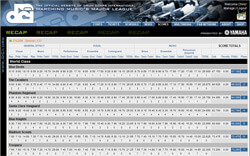 View a complete recap of scores from Denver.
Just a reminder: When reading about the recaps, please be aware that General Effect (GE) Visual and GE Music are the only two captions that are not divided in half prior to their addition to the final score. When caption spreads are mentioned below, those other than General Effect are first listed with the score given by the particular judge for that caption, followed by a slash and the half-value score that was added to the overall score. This is the first competition weekend that used a nine-person judging panel, with the addition of a second percussion judge. Now, one percussion judge is in the stands and the other is on the field, the two scores are averaged together for the final overall score. The big news out of Denver was anticipated, though the result wasn't clear until the announcement of the scores. Two corps were entering the show undefeated, and at least one would come out with an unbroken string of consecutive victories. By a margin of 0.525, Blue Devils overcame the challenge from the Cavaliers to enter this coming weekend's DCI Southwestern Championship in San Antonio as the one remaining undefeated corps. With a final score of 87.150, Blue Devils took the combined Visual captions by 0.3 with a 0.3/0.15 gain in Visual Ensemble, a 0.4/0.2 advantage in Color Guard, but a 0.1/0.05 deficit in Visual Performance. The corps also took the combined Music captions by winning the Brass caption over the Cavaliers by 0.1/0.05, Visual Ensemble (in which the Cavaliers placed 3rd) by 0.5/0.25 and averaged Percussion by 0.05, tying Phantom Regiment. The corps placed just 0.1 down to the Cavaliers in total General Effect, winning GE Visual by 0.3 and placing 3rd in GE Music, 0.4 under Cavaliers and 0.1 under Phantom Regiment. The Cavaliers (2nd, 86.625) held off Phantom Regiment by 2.275 largely due to an advantage of 1.6 in total General Effect alone. Most of this was due to Phantom's 4th place finish in GE Visual, 1.3 under the Cavaliers and 0.3 under Santa Clara Vanguard. The corps' 0.05 deficit to Blue Devils and Phantom Regiment in Percussion helped keep the 3rd place total Music score within 0.075 of Phantom's 2nd place Music score and 0.325 from Blue Devils' winning Music score. Phantom Regiment (3rd, 84.350), with a 0.3 deficit in GE Music to the Cavaliers, beat the Blue Devils' score in that caption by 0.1. A 0.75 deficit to the Cavaliers in the overall Visual captions was mostly due to being down 0.8/0.4 in Visual Ensemble (0.3/0.15 under SCV). The corps was much closer to its Illinois brethren in total Music, finishing in 2nd, 0.075 above the Cavaliers. Just 0.2/0.1 down in Brass and 0.3/0.15 up in Music Ensemble, the real intrigue came in the two Percussion captions which were averaged for the total Percussion score. In Percussion 1, the corps was 0.6 down to the Cavaliers, but was up by 0.7 in Percussion 2. Overall, with an averaged Percussion spread of just 0.05 between the top three corps, this should be a caption that is watched with great interest in the coming weeks. Santa Clara Vanguard (4th, 82.750) ended 1.6 under Phantom Regiment after placing 4th in all the Music captions, 0.5 down to Phantom in total Music. Things were much closer in the three Visual captions, with the corps being 0.2/0.1 down (4th) in Visual Performance, up by 0.3/0.15 (3rd) in Visual Ensemble and 0.7/0.35 (4th) down in Color Guard. The corps bested Phantom by 0.3 in its 3rd place finish in GE Visual, but was 0.7 down to Phantom's 2nd place GE Music score in finishing in 5th, placing under Blue Knights by 0.1. That 4th place GE Music score was the highest caption placement for Blue Knights (5th, 80.000), for a total GE score of 0.6 under Phantom Regiment and an overall score shortfall between the two corps of 2.750. On every other judge's sheet, the corps finished in 5th. In GE Visual, the corps ended 0.4 down to Phantom Regiment and 0.7 down to SCV in the same caption. A 1.3/0.65 deficit to Phantom in Visual Ensemble was responsible for the next largest single caption spread between the corps and SCV. The corps finished 1.0 down to SCV in total Music and 1.15 down in total Visual, but maintained a 3.3 spread over 6th place Madison Scouts in total GE and a 2.20 advantage over the corps in total Visual. Madison Scouts (6th, 73.475) finished 1.5 under Blue Knights in GE Visual and 1.8 under in GE Music, placing 7th in both captions and finishing 0.8 under the Troopers in total GE. The corps was also 7th in Visual Ensemble and 8th in Color Guard, a full 3.1/1.55 under Blue Knights' 5th place guard and 0.6/0.3 under the Troopers' color guard. Madison finished 6th in all other captions. Troopers (7th, 73.250) were 6th in total GE and Color Guard, 8th in Visual Ensemble and 7th in all other captions. The corps' total Visual score was just 0.4 under the Madison Scouts, despite a 1.1/0.55 deficit in Visual Performance. Mandarins (8th-69.125) finished 2.4 under Troopers in total GE and 1.6 under the Madison Scouts. The corps placed 7th in Color Guard, just 0.3/0.15 under Troopers' 6th place color guard. Besides color guard and 6th place in Visual Ensemble, the corps finished 8th in all other captions. The 6th place finish in Visual Ensemble was 0.7/0.35 over the Troopers and .4/.2 over the Madison Scouts. Despite being 1.2/0.6 down in Brass to Troopers, the corps was only 0.2/0.1 down in Music Ensemble.