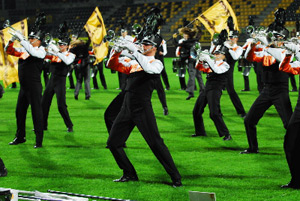 Jubal of Dordrecht, the Netherlands
"Yes we can!" was posted on the Jubal Drum and Bugle Corps Web site this weekend after the group from Dordrecht, the Netherlands bested a field of 20 corps from Germany, Italy, the United Kingdom and the Netherlands to grab the 2009 Drum Corps Europe (DCE) Championship title on Saturday. In second place by more than a point after the Prelims competition earlier in the day, Jubal came from behind during the Finals, pulling ahead of the Kidsgrove Scouts of Kidsgrove, Staffordshire, England and the reigning DCE Champion Senators from Eastleigh, Hampshire, England who finished third.

Scores are announced to a packed crowd during the 2009 DCE Championship
at Parkstad Limburg Stadium in Kerkrade, the Netherlands. 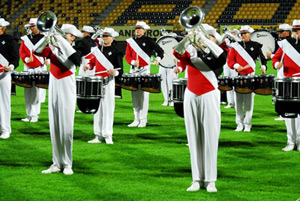 Kidsgrove Scouts of Staffordshire, England
Earning its highest score ever, 90.15 out of 100 points, Jubal also received individual caption awards for best percussion and best brass performance. The corps' 2009 program titled "Goochelaars & Geesten" featured music from Cirque du Soleil, Dutch experimental pop artist Spinvis and the progressive metal band SymphonyX. Jong Jubal captured the DCE Cadet Class gold medal with a score of 83.7, giving the Jubal organization two championship flags to hang on the wall back in Dordrecht. On the verge of its 100th anniversary, Jubal has plans to tour the United States in 2011. The corps last came to the U.S. in the summer of 2006, participating in the Drum Corps International Tour and World Championships in Madison, Wis. View all scores from the Drum Corps Europe Championships. Learn more about Jubal on the corps' Web site. Photos courtesy Drum Corps Europe.