From a Dutch in DCI press release:

Saturday, Oct. 6, marked the second annual "Dutch in DCI" banquet held in Huizen, the Netherlands. Drum corps fans and members who marched in Drum Corps International corps from the mid-1980s to 2007 gathered to share stories and memories. The Dutch in DCI Class of 2007 received a plaque and a patch for their efforts during the past season.

2007 marked the second year of the Dutch in DCI Foundation. The foundation aims to support, foster and expand the participation of Dutch students in drum corps units. In 2007 three members received $1,000 scholarships to support their goal in marching with an American corps. 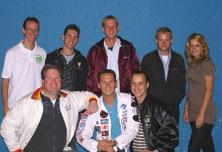 Ever year since 1980, there have been Dutch individuals who have participated in Drum Corps International units. Seven in total were part of corps in 2007 including Boston Crusaders the Cadets, Glassmen and Pioneer.