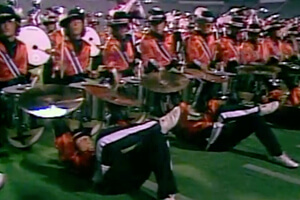 1979 North Star
North Star was with us for only seven seasons, making the DCI World Championship Finals in 1978, 1979 and 1980. Formed from a merger of the Blue Angels, Cardinals, Legion Vanguard and Reveries, the corps was identified as being from North Shore, Massachusetts, which isn't a city, but a region generally considered to be along the Atlantic Ocean from Boston to New Hampshire. At one time, this region was one of the biggest hotbeds of the drum corps activity, and during its time on the field, North Star staked its claim as a corps that was determined to entertain above all else. The corps' ninth-place 1979 production opened with Chuck Mangione's popular "Children of Sanchez." How popular was this piece of music in 1979? It was performed at the Finals in Birmingham, Ala., by the ninth, 10th and 11th place corps; (Blue Stars and the Cavaliers being the other two units.) As the 11-man snare drum line opened up a widening "V" formation from two straight lines along the 50, the corps' spectacular soprano soloist belted a bullfight-sounding fanfare, letting everyone in the audience know they were in for thunderous production. The snare line of David Vose's drum section was abnormally large for the time, named the "Chrome Wall" for the impressive appearance of the 11 metallic-finished snares advancing toward the audience in perfect unison. In '79, the line tied for top honors in the Percussion Execution caption, though Santa Clara Vanguard's line captured the overall high percussion award. After the half-minute opening fanfare, the corps moved into the main melody of Mangione's theme, with the 10 members of the color guard rifle line up front as they so often were. This is the piece that won Mangione a Grammy Award for Best Pop Instrumental Performance. The movie score also won a Grammy. The piece has a Spanish feel, being that the movie (starring Anthony Quinn) is set in Mexico City. Full of fire, its frequent moments of high-note-screaming brass proved quite popular with audiences. Needing a chance for the horn players to cool their lips a bit, Mangione's "Bellavia" followed. This ballad, recorded with Mangione's quartet, won the composer his first Grammy Award in 1977, for Best Instrumental Composition. The title means "beautiful way" in Italian and was his mother's nickname.
1979 North Star performance excerpt.

Maynard Ferguson's interpretation of "Ol?©" came next, starting with a very brief percussion mallet intro that led into an original four-part soprano fanfare that became one of the most memorable moments of any corps during the 1979 season. Slide Hampton, an extremely successful jazz trombonist, arranger and composer, wrote the piece. He was perhaps best known for a television role in which he wasn't seen, as the "ghost" trombonist for Russell Huxtable, father of Cliff Huxtable in "The Cosby Show." The soprano soloist had an extended bullfight-sounding unaccompanied solo prior to the piece recapping its earlier blazing melody. Brass players brought out sticks adorned with silver tinsel for a drum solo that lasted just over a minute, picking up on the color of the drum line's chrome shells. It ended in a 22-yard-wide four-point star surrounding a large "N" formation representing the corps' logo. "Beach Boys Medley" opened with a brief 32-count quote from the band's "God Only Knows," written by band member Brian Wilson and referred to by Paul McCartney as his favorite song of all time. "Good Vibrations" followed, a happy-go-lucky rendition of the band's first million-record-selling number one hit. During a baritone solo, a visually fetching sight was the rifle line's use of metallic silver banners on both ends of long poles, enhanced by much longer fuchsia streamers. For a visual effect, sections of brass players took out from their uniforms the sticks of silver tinsel that they used earlier, holding them upright against their horns through the first part of "Good Vibrations" and six short measures of the Beach Boys' "Barbara Ann." At the beginning of a company front push of "Good Vibrations," the horn players tossed the sticks high in the air behind themselves and the cymbal players laid on their backs with their legs crossed as the snare drummers pounded out a groove on the brass plates. At the end, just about everyone except the flags and some soloists were either kneeling or lying on the ground, soaking up the good vibrations that made this show's ending one that every audience looked forward to hearing more than once. For this week only, you can save on the Legacy Collection DVD that contains this complete North Star performance, along with all finalists from the 1979 DCI World Championships. Buy the 1979 Legacy Collection DVD. (Available this week only for $28. Regular price: $35.)