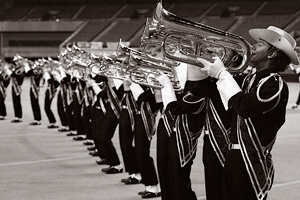 1982 Madison Scouts
The 1982 Drum Corps International World Championship Finals were a chilly affair, with the temperature dipping to 41-degrees Fahrenheit at Montreal's Olympic Stadium. Things stayed hot on the field, however, as this was the first year all finalist corps eclipsed 80 points in their final scores, including the first-year finalist Sky Ryders from Hutchinson, Kansas. Blue Devils were the hottest unit of all, becoming the first corps in DCI history to complete an undefeated season. Madison Scouts' 5th-place production began with "Slaughter on 10th Avenue," music written by famed composer Richard Rodgers for the 1936 Broadway musical comedy "On Your Toes." The piece was a ballet staged within the musical and was choreographed by George Balanchine, who choreographed 39 ballets for Igor Stravinsky. Balanchine defected to America from the Soviet Union just two years earlier and is perhaps best remembered for his rendition of "The Nutcracker" that is performed at New York's Lincoln Center every Christmas season. Rodgers is best known for his collaboration with Oscar Hammerstein II, producing musicals such as "South Pacific," "The King and I," "The Sound of Music," and "Carousel." "On Your Toes" was a collaborative venture with his earlier lyricist, Lorenz Hart, who was beginning to experience failing health. To better appreciate the impact Rodgers had on American music, consider that he is one of only two people who won an Emmy, a Grammy, an Oscar, a Tony and a Pulitzer Prize. The Scouts had played "Slaughter on 10th Avenue" in 1974 and 1975, and they brought it back in 1989 and 2010. Starting spread across the field, the opening brass exclamations were a powerful way to kick off the show, as it had been during the corps' Championship-winning production in 1975. Mallet percussionists brought their marching keyboards to the front sideline and set them down shortly after the show began; followed by a dance routine by the color guard rifle section. Dance elements were still pretty much in their infancy on the drum corps field during this era, and this was one of the more prominent features for its day. The corps' concert standstill production of "Strawberry Soup" came from the Don Ellis album, "Tears of Joy," performed live in 1971 at a San Francisco club with a string quartet added to the normal big band instrumentation. Many jazz musicologists consider this Ellis' most complete exploration of the rhythms and unusual meters for which he was so fond. He broke down the beat into several different rhythmic divisions within the 9/4 metrical framework so that it wasn't just the 3+2+2+2, 3+2+2+2 pattern most commonly associated with the tune. Many of the patterns even spill over the bar line into the following measure. 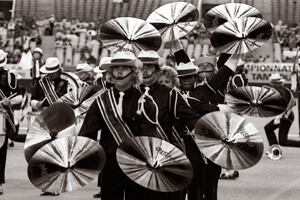 1982 Madison Scouts
1982 was the first of three years that Madison played the work which also include 1983 and 1993. Starting backfield with the string quartet intro, the piece again prominently featured the corps' rifle line, popularly known at the time as "Madison's Magnificent Men" for their excellence and conspicuous exposure to difficulty. The beginning of the percussion feature "Downwind" featured all of the guard members tossing their flags to horn players in order to pick up rifles. The piece came from the 1979 album of the same name by Pierre Moerlen's Gong, a jazz-rock-fusion album that predominantly featured mallet percussion instruments, making it instantly transferable to the field during a time when front ensemble percussion instruments were just coming into their own. The rest of the brass players, minus tubas, took out shorter-handled swing flags from sheaths hanging at their sides and filled the field with a flurry of spinning silks as the low brass laid down the bass line. The late Marvin Hamlisch, composed the closer of "Through the Eyes of Love." The song became a huge commercial hit by Melissa Manchester and was the theme song for "Ice Castles," a 1978 romantic comedy about a figure skater who went blind after a freak accident, rediscovered love and learned to competitively skate again. Madison's sentimental rendition began with a baritone horn solo and worked its way toward a giant pivoting form that collapsed into a company front, bringing the audience members to their feet a minute before the end of the show. Coincidentally, Hamlisch is the only other person besides Richard Rodgers to have won an Emmy, a Grammy, an Oscar, a Tony and a Pulitzer Prize, presenting an interesting set of bookends the Madison Scouts' 1982 production. For this week only, you can save on the Legacy Collection DVD that contains this complete Madison Scouts performance, along with all finalists from the 1982 DCI World Championships. Buy the 1982 Legacy Collection DVD. (Available this week only for 20% off. Regular price: $35.95.)