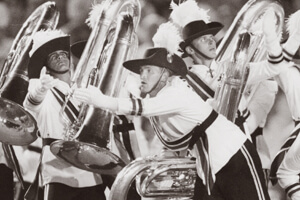 1991 Santa Clara Vanguard
The 1991 DCI World Championships at the Dallas Cotton Bowl contributed a couple pieces of memorable drum corps trivia: For the only time in DCI history, the top three corps in the Finals (Star of Indiana, Cavaliers and Phantom Regiment) all hailed from the same region. Also, Champion Star of Indiana didn't win a single total caption outright, but tied in three of the four; General Effect with Phantom Regiment, Brass with Blue Devils and Percussion with the Cavaliers. Through the entire season, Star of Indiana's "Roman Images" was known for a seemingly continuous series of fast mellophone passages that should have left those players begging for mercy. At the very end of the season appeared the masterstroke that people still talk about to this day; the remarkable, come-from-nowhere dissolving diagonal cross that magically reappeared in mirror image on the other side of the 50. It was George Zingali's final masterpiece of drill writing. Star lost only two shows all season, back-to-back contests in late June. The first was to the Cavaliers, who would place a close 2nd in Dallas by 0.70. The second was to Madison Scouts, who, despite beating Star by 2.30, would finish 7th in Dallas. Santa Clara's 4th place show of "Miss Saigon" was a quasi-literal interpretation of the hit musical by Claude-Michel Schönberg and Alain Boublil, the two men who brought us "Les Miz" a few years earlier. The show was in essence an update of the Puccini opera, "Madame Butterfly," which had been set in 1904 Japan. Like its predecessor, "Miss Saigon" featured a story of an American military man who left behind an Asian woman, who never stopped thinking he would come back for her. The musical didn't appear on Broadway until April of 1991, but corps director Gail Royer had flown to London to view the production during the early part of its successful run of 4,264 performances. Convinced it would become a smash hit in America—with oodles of publicity—just about the time the drum corps season was to begin, he started the process of putting together a show based on something that few drum corps fans had yet to hear about. The first moments of the show were amongst the most talked about all season. Percussion arranger Scott Johnson, who would soon be picked up by the Blue Devils, created a sequential audio effect utilizing various drums scattered across the field to produce the sound of rotating helicopter blades while brass players and color guard members ran onto the field from opposite sides. It was downright spooky in its authenticity. Today such an effect would be produced via a synthesizer, but even that wouldn't be as effective as what SCV worked out acoustically. The horns and drums were attired in a white dress military uniform while the color guard members, toting enormous Asian parasols, was dressed as Vietnamese maidens. The opener of "Overture" introduced the main characters, represented across entire sections of the corps. The tender "Sun and Moon" captured the naïve infatuation of the two central characters in the music, Chris and Kim, as they pledged their love to each other. Militaristic sounds of marching troops opened "Morning of the Dragon," a defiant work capturing the effect of the musical's street parade commemorating the third anniversary of the Fall of Saigon. One of the most transcendentally gorgeous moments ever put on the field was "Wedding Ceremony," with the guard performing gentle sweeping motions with giant bamboo fans. This lovely moment was shockingly interrupted by the sound of gunfire, bombs, an air raid siren and the descending whine of a falling bomb at the beginning of "The Fall of Saigon." The sound of the falling bomb was achieved by using a simple slide whistle, which descends in pitch as the small plunger at the end of the cylinder is pulled out. This effect is connected to one of the best drum corps stories that I've ever heard. When I attended a rehearsal of the corps in Wisconsin, Scott Johnson told me that Gail Royer didn't like the sound of the whistle the staff had selected. So, sometime shortly after that, they covered the whistle in white tape and demonstrated it to Royer as a new and improved whistle. Royer "approved" the sound and the "new" whistle stayed in the show. "The Fall of Saigon," witnessed in flashback, captured much of the angst amidst the violent upheaval and uncertainty of the real life drama when Saigon, soon to be renamed Ho Chi Minh City, was blowing apart at the seams. As Americans and their sympathizers struggled to leave via helicopters from the roof of the American embassy, tall triple-level Viet Cong flag banners filled the field as the Cong moved in on the city. Saved for the end of the season, upon the completion of the music, the helicopter sounds once again appeared as the horn players grabbed a 50-yard wide red banner and pulled it over the field as the color guard members ran underneath. At the lower right corner of the gold-starred Viet Cong flag was a small reminder of the Stars and Stripes, demonstrating the passage from one political system to another. Those of us who grew up during the Vietnam War kept hearing about "the light at the end of the tunnel." Ultimately, for those who were left behind, as their hopes dissolved with the disappearance of the American helicopters, that light became an oncoming train. That huge flag was a reminder of the trauma of the time; both in southeastern Asia and at home in America. It was a sucker punch to the gut and for some in the audience with whom I had spoken at the end of the season; it proved to be a bit too realistic.

For this week only, you can save on the Legacy Collection DVD that contains this complete Santa Clara Vanguard performance, along with all finalists from the 1991 DCI World Championships.