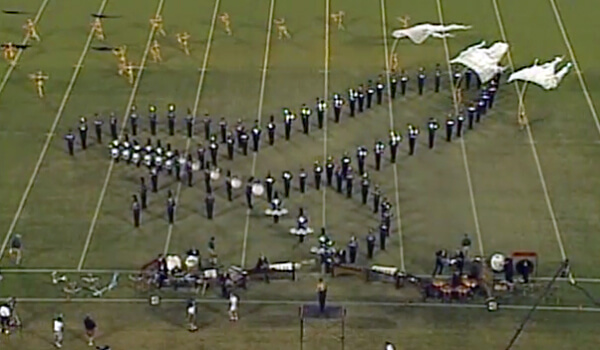 1996 Magic of Orlando
In 1996, one-third of all the corps competing in the DCI World Championship Finals in Orlando were involved in ties with other corps. The first tie to be announced was between Crossmen and Magic of Orlando for 8th place, and then a first-ever tie at the top was announced between Blue Devils and Phantom Regiment. 1996 marked the first in a three-year joint venture between DCI and the Walt Disney World Resorts that saw the Finals come to the Citrus Bowl. It was also a year notable for the Cadets who left the DCI Tour for two days toward the end of the season in order to perform on worldwide television during the closing ceremony of the Summer Olympics in Atlanta. Magic of Orlando, having made the Finals over the past two seasons by playing all-original musical productions by arranger Robert W. Smith, brought another one of his compositions to the field. Smith arranged the corps' 1996 show "Twelve Seconds to the Moon" from a composition written earlier in the year for the United States Air Force Band of Flight, stationed at Wright-Patterson Air Force Base in Dayton, Ohio. Dayton is the city where Orville and Wilbur Wright experimented with and constructed their first powered, heavier-than-air piloted flying machine that ultimately flew for 12 seconds at Kitty Hawk in North Carolina in 1903. Less than six decades later, President John F. Kennedy, in a speech to Congress, called for the nation to put a man on the Moon and safely return him to Earth before the end of the decade. It seemed appropriate for Magic to perform such a show, being that NASA space launches were visible from its hometown. Smith's composition traced the steps from building that first airplane to the ultimate launching of Apollo 11, from which the "Eagle" lunar module set forth to land on the Moon. Mysterious sounds in the opening of the production reflected man's dream of flight, accompanied by the sight of the color guard members in rather intriguing uniforms. The costumes seemed to suggest the appearance of aliens as often seen in old comic strips such as "Flash Gordon." The brass players were arranged in the form of a waxing crescent moon. This was followed by a gentle chorale that Smith referred to as the "Hymn of Flight," with extremely long banners spun by the color guard members as if contrails in the sky. The second movement, heard in the accompanying video clip, captured the thrill of working toward the first human flight with a rousing extended fanfare. The third movement featured many industrial sounds in the percussion. Referencing the clanging factory environment during the building of the first airplane, keep an ear open as a front ensemble percussionist continually strikes a large metallic cylinder with a heavy sledgehammer. At the climax of the construction sounds, a representation of a biplane soared over the field, representing that first 12-second flight by the Wright Brothers at Kitty Hawk. The "Hymn of Flight" returned to celebrate the culmination of centuries of dreams about flight, much louder and more heroic than earlier in the show. Another jubilant fanfare directed the horns and drums into the form of a rocket, which then moved through the clouds toward the heavens. The motion of flight was conveyed through the rocket staying still and the clouds, represented by three large white silks, passing through the vessel as it pierced the cloud layer. During this, loud drum rolls created the sonic image of booster engines in full propulsive takeoff. The rocket set off toward the darkness of space, seen in the pitch-blackness of the flags. Apollo 11 then left Earth's atmosphere, bound for that fateful July day in 1969 when Neil Armstrong and Buzz Aldrin would become the first humans to set foot on the Moon. The horns and drums collapsed into a ball as the lunar module "Eagle" landed on the Moon. In tandem, the earlier-seen first airplane swept across the field as if imagined by Neil Armstrong as he stated, "That's one small step for a man, one giant leap for mankind"—words that still resonate through human consciousness yet today.

For this week only, you can save on the Legacy Collection DVD that contains this complete Magic of Orlando performance, along with all finalists from the 1996 DCI World Championships.