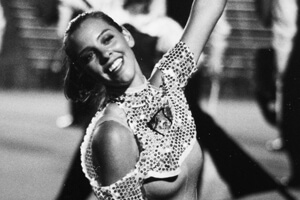 1997 Glassmen
In 1997, the Drum Corps International World Championships went to Orlando for the second of three consecutive years. With both DCI and Walt Disney World celebrating 25th anniversaries, Citrus Bowl Stadium and Epcot were brimming with drum corps festivity, including a parade of corps through the Disney park. Competitively, the race to the top was tight toward the end of the season. Though Blue Devils' "Casablanca" show earned the corps its ninth DCI title, the two weeks leading up to the World Championships witnessed the Devils and Cadets of Bergen County besting each other by a tenth of a point and also tying once. Santa Clara Vanguard tied BD for 1st in Quarterfinals, even though the eventual 3rd place corps finished 9.5 points under their Bay Area rivals at the first show of the season. Other highlights included Crossmen placing 6th for the second time, Madison Scouts presenting a costumed pirate battle, and Magic of Orlando starting their show with a Carnivale parade. Many heads were scratched during the Cavaliers' tightly compressed circles at the start and end of their "Firebird" show, featuring modern dance-like movement and the audible rush of breathing that represented the birth and rebirth of the Firebird. After making the World Championship Finals for three years, Glassmen dropped to 13th in 1996 and rebounded to 8th in 1997, on the way to three top-five performances over the next four years. With "The Age of Gold: The Music of Georges Bizet," the corps broke 90 points in the Finals for the first time in its history. Bizet only lived 36 years, but in that time composed a number of works that have survived and are regularly performed. Most notable among these include his opera, "Carmen," premiered three months before his death. Some speculate that his belief the opera was a total failure helped to hasten his demise. The show started with "Introduction" and a hint of the famed chimes motif from the very end of Rodion Shchedrin's 1967 "Carmen Suite" in the percussion, with the "Farandole" melody from Bizet's "L'Arl?©sienne" in the brass and a grand statement of "Farandole" at the climax. Quite often, when people hear what they think is music written by Bizet for "Carmen," what they're really listening to is music Shchedrin wrote for his masterful repackaging of Bizet's music, arranged entirely for strings and percussion. The work almost didn't see the light of day due to interference from Soviet authorities who couldn't appreciate its whimsy and insisted it denigrated the opera and insulted the Spanish culture and people. Interestingly, it survived due to the personal intervention of Dmitri Shostakovich. The corps' production borrowed liberally from Shchedrin's material, as in the extended percussion opening to "Scene and Variations" and the whimsical and lighthearted "Changing of the Guard." "Intermezzo—The Mountain Pass" was mostly from "Act III—Entr'acte" of "Carmen" and was tinted by the "Second Intermezzo: Larghetto" movement of the Shchedrin work, which was the same melody. This was the heart and soul of the show, a hypnotically beautiful repose that brought a large number of differently-sized ladders to the field, in essence creating the peaks of the mountains inferred by the title of the selection. In the Bizet opera, this is where Don Jose was hiding out in the mountains, reminiscing about missing his home and mother. The closer of "Farandole," from "L'Arl?©sienne Suite No. 2," remains perhaps Bizet's most popular concert work. Based on the title of a French folk dance, it was extracted from his incidental music to the Alphonse Daudet play, "L'Arl?©sienne," ("The Girl from Arles"), a production that was not commercially successful. Premiered in 1879, four years after Bizet's death, the suite was arranged by Ernest Guiraud from Bizet themes (not all from "L'Arl?©sienne"). It was a rousing finish to the show that brought the corps back into Finals and pointed toward the higher finishes the group would enjoy over the next few years. For this week only, you can save on the Legacy Collection DVD that contains this complete Glassmen performance, along with all finalists from the 1997 DCI World Championships. Buy the 1997 Legacy Collection DVD. (Available this week only for $28. Regular price: $35.)