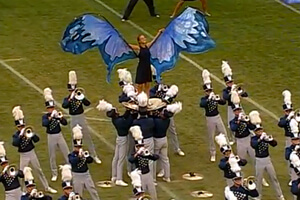 1998 Blue Knights
The end of the 1998 Drum Corps International Tour Tour was one of the more exciting ones in DCI's four-decade history. While the Cadets of Bergen County won at the Finals, the corps was 3rd in Quarterfinals and moved up to 1st in Semifinals, where Santa Clara Vanguard and Blue Devils tied for 2nd. Cadets' "Stonehenge" show was purely abstract, musically and visually, and included one of my favorite color guard routines, an-ever-changing color spectrum of flags that rippled back and forth. Santa Clara Vanguard showed us Aaron Copland's lesser-known side as a modernist and Blue Devils introduced the female lead from "Romeo and Juliet" to the streetwise Tony from "West Side Story." The Cavaliers celebrated their 50th anniversary by demonstrating a traditional color guard handing the reins to the contemporary guard. Glassmen jumped into 5th place, after falling out of the Finals two years prior, while Colts grabbed the coveted 12th spot after a 13th-place finish the year before. Blue Knights' ninth-place "Masters of the Symphony" led us through a music appreciation class in the history of large-scale western symphonies, in reverse, as if we were traveling backward in time toward the moment when Beethoven threw open the orchestral doors and greatly expanded the numbers and instrumentation of a symphonic orchestra. The show started with the brooding first movement, "Moderato," from Dmitri Shostakovich's "Symphony No. 10." The symphony was premiered in the Soviet Union a few months after the death of brutal Soviet dictator Joseph Stalin, whose ironclad rule was responsible for the death of untold millions of Shostakovich's fellow citizens. Mysterious and foreboding, the introduction was disturbing in its gloom and pathos, building to a tragic climax that led into the terror and ferociousness of the second movement, "Allegro." The composer was quoted in his memoir that this movement, with its ever-interrupting military drumming, depicted the wrath of Stalin's regime. Although musicologists debate whether Shostakovich was properly quoted, the fury of the music was more than apparent in the robust forceful delivery provided by the horns and drums.
Performance excerpt of the 1998 Blue Knights.

"Symphony No. 6: Path?©tique," of Peter Illyich Tchaikovsky, was the composer's final symphony and was premiered in 1893, 60 years prior to the Shostakovich work. The title is said to refer to emotional passion and possibly even passionate suffering, at least according to the composer's brother. The first movement, somewhat bleak in its softer opening and louder conclusion, featured the guard holding and tossing squares akin to picture frames. The third movement is a heroic march; the hand-painted flags becoming more brightly colored to reflect the sudden and somewhat unexpected burst of optimism in the music. Antonin Dvo??ˇk's "Largo" from "New World Symphony" also premiered in 1893. It has been one of the famous symphonic ballads on the drum corps field and is often referred to as "Goin' Home" (for the song based on the melody that came later). The movement was inspired by African-American spirituals and was written during the composer's stint as director of the New York Conservatory in the early 1890s. Giant butterfly wing flags of varied pastel shades filled the field, with one guard member bearing the double flags lifted high atop the plates of the cymbal players. Upon those flags disappearing, the giant ending form of this movement referenced the form of a butterfly. Perhaps no piece of symphonic music has been as universally embraced as Ludwig van Beethoven's "Ode to Joy," the final movement of his phenomenal "Symphony No. 9." It was the composer's final masterpiece, written in 1824 when he was profoundly deaf. A minute before the end of the show, the grand statement hit with full force as two blocks of horns passed through one another, culminating in a company front that pushed to the front in heroic proclamation and concluding the study in symphonic forms with an emphatic bravado. For this week only, you can save on the Legacy Collection DVD that contains this complete Blue Knights performance, along with all finalists from the 1998 DCI World Championships. Buy the 1998 Legacy Collection DVD. (Available this week only for $28. Regular price: $35.)