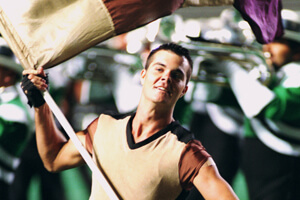 1999 Cavaliers
In 1999, the Drum Corps International World Championships returned to the venerable Camp Randall Stadium at the University of Wisconsin for the fifth time and the first since 1992. Blue Devils and Santa Clara Vanguard tied for the championship, reminding fans of the first tie at the top three years earlier between Blue Devils and Phantom Regiment. It was the 10th title for the Devils and the sixth for Vanguard. Other than the tie, perhaps the most notable story at the Finals was that of the Boston Crusaders. The corps earned its first finalist berth ever in 1999, ending the longest wait of any of DCI's charter member corps to perform in the biggest competition of the summer. (Two of those corps, Blessed Sacrament and Blue Rock, ceased operations in the early years of DCI before they could make Finals.) Also in 1999, Cadets of Bergen County became known simply as the Cadets, and the Crossmen celebrated their 25th anniversary. Glassmen repeated in 5th place and the 7th place Blue Knights achieved their highest score ever in Finals, a 92.50. For many fans, 1999 will be remembered as the last year all corps played on G-keyed bugles. After a rule change during the off-season, the following summer the Blue Devils and Cadets moved to B-flat horns, which opened up the floodgates for the rest of the corps to follow suit shortly thereafter. The Cavaliers' third-place production, "Classical Innovations," was built around two contemporary wind band fantasies that were based on melodies of two classical composers who shared a common bond. Beethoven's "Ode to Joy" was generously heard in the opener of Timothy Mahr's "Fantasia in G," a 1983 work by the band director of St. Olaf College outside Minneapolis. The remainder of the show was Norman Dello Joio's "Fantasies on a Theme of Haydn," written in 1963 and based on a melody by Beethoven's most famous teacher, Franz Joseph Haydn. Johann Schiller's poem, "Freude, Schoener Goetterfunken" ("Joy, Bright Spark of Divinity") was set by Beethoven as the final movement of his last great work, "Symphony No. 9," which is perhaps the most beloved piece of music in the world. The Beethoven melody was continuously heard in "Fantasia in G," but never wore out its welcome. Visually, the Cavaliers took various treatments of the melody and highlighted them with an expansive degree of geometric mutations. One of them, which the corps referred to as the "diamond cutter," featured multiple groupings of four brass players alternately spinning around a tight fixed point, all while playing and moving the entire form forward. The "diamond cutter" became one of the best-loved moves ever done by the corps, rightfully famous for memorable drill moves. It's right up there with the "dragon" squiggle from "Variations on a Korean Folk Song" and the "step-over" from "Softly as I Leave You" which the corps performed in the 1980s. The Dello Joio piece was inspired by a theme from a Haydn piano composition. The work is in three movements; the second lyrical movement surrounded by two movements of "bubbling humor," as Dello Joio described it. The Cavaliers followed the format of the original for their three segments. Band members may better know Dello Joio for his "Scenes from the Louvre" and "Variants on a Medieval Tune." The chorale of the latter appeared in Santa Clara Vanguard's "New Era Metropolis" show in 2001. The first segment is pure whimsy, playfully lighthearted, captured by some carefree antics in the color guard. The second movement, ethereal and chordally elongated, was largely played to the backfield until the big turn to the front. After that blast to the stands, a block form set on the diagonal toward the back right corner expanded and contracted like a mouse passing through the abdomen of a snake, ending with the form uncurling to a continuous twisting curve while vocal humming floated over a simple vibraphone statement of the "Ode to Joy" melody in the front ensemble. The third segment of the Dello Joio work quickly led into a drum break and a color guard rifle toss of several rotations, winding its way toward a grand company front of the "Ode to Joy" melody. Combining the themes from both the main selections, a dizzying multitude of pass-throughs brought this most quintessential of 1980s and 1990s Cavaliers shows to a screaming conclusion. For this week only, you can save on the Legacy Collection DVD that contains this complete Cavaliers performance, along with all finalists from the 1999 DCI World Championships. Buy the 1999 Legacy Collection DVD. (Available this week only for 20% off. Regular price: $35.95.)