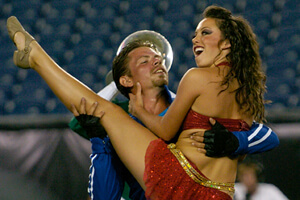 Madison Scouts
The 2005 DCI World Championship Finals at Gillette Stadium in Foxboro, Mass. is often remembered for two different records: 1. The Cadets' record-tying score of 99.15 and 2. the miserably hot and steamy Finals night that broke a local temperature record of 101 years. It was the second time Drum Corps International went to Foxboro; the first time in 1994 at a stadium that was torn down to make way for a parking lot at Gillette. Earlier in the season, Santa Clara Vanguard did not qualify for the top-eight showcase at the Masters of the Summer Music Games in Murfreesboro, Tenn., having placed 9th at both the DCI Southwest and Midwest Championship events. Blue Devils were in no shows between June 18 and July 15 due to a three-week trip to Europe, causing much early-season speculation among fans. Ultimately, Spirit from JSU slipped back into Finals after falling out the year before, Phantom Regiment finished in the top-three for the first time since 1996 and Bluecoats' 5th place finish was the highest in the corps' history up to that time. One of the most intriguing aspects of Madison Scouts' sixth-place production, "The Carmen Project," was the guest appearance of a woman in the all-male corps' color guard. Speaking with corps director Sal Salas prior to the season, he mentioned he first asked the designers to think about the idea, and when they all got together, they concluded the corps would need a female Carmen if they were really going to pull off the story of the Georges Bizet opera and not just play the music. There was precedent for this, as former director Bill Howard's daughter played the part of Alice in Wonderland during the corps' 1971 "Scouts in Fantasyland" production. Also, at the 1980 VFW Nationals (a post-DCI season show) the corps utilized three members of the all-female Capitolaires for the American flag squad required under VFW rules. The corps' staff was conducting a search to find the perfect Carmen when someone with two sisters in Madison-based Capital Sound corps walked into a rehearsal to listen to the music. Salas and then program coordinator Michael Cesario looked at each other, knowing instantly she would have to become Carmen. When they asked her to audition, they learned she didn't know about their search. When she came in to audition with choreographer Lionell Moore, it was discovered she was a classically trained dancer and could do anything she was asked. This was not a traditional "Carmen" show with toreadors, roses and Spanish shawls. Rather, it reflected the ills of contemporary society with conflicting jacketed gangs of blue versus green. The classic themes of fate and revenge were infused with sizzling Latin jazz and hip dance rhythms, accompanying an urban brotherhood of the streets. The rivals were introduced amid sounds of multiple sirens during "Introduction/We Own the Streets," and clearly kept apart from each other. The lead female character wasn't introduced until after the four-minute mark, entering the field behind members of the green gang during "Carmen Revealed/Dances of Temptation." She then circulated between members of both gangs, freely seducing anyone she could, regardless of gang affiliation. "Cubano Mambo" turned up the heat during the jazzed up melody of Bizet's "Toreador Song," with Carmen leading the gang members in dance. During a drum feature of "Street Fight," set to Bernstein's "Prologue" from "West Side Story," rival members went after each other with knives and chains, and Carmen was caught in the middle of the melee. Blood was shed with a couple dozen red ribbons tossed in the air, and Carmen fell to the ground, her life extinguished. After she was carried off the field, green and the blue-clad members were alternately intertwined at the start of "Finale," each expressing anguish amidst a sea of blood red flags as sirens and police whistles blared. The brass players ran into a diamond block, surrounded by flags, then lifted their horns and screamed out a single 14-second long chord as the guard members collapsed, emitting an anguished cry that hung over the stadium well past the release. For this week only, you can save on the World Championship DVD set that contains this complete Madison Scouts performance, along with all finalists from the 2005 DCI World Championships. Buy the 2005 World Championship DVD set. (Available this week only for $36. Regular price: $45.) Discount DVD offer ends Monday, Oct. 29 at 8:30 a.m. ET.