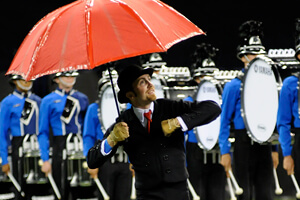 2009 Bluecoats
In 2009, the DCI World Championships went inside for the first time in history, as the comfortable confines of the enclosed Lucas Oil Stadium welcomed drum corps for the first of several years in a row. While the venue was new, the announcement of Blue Devils in first place was something heard that year for the 13th time at the Finals, with the corps taking four of five caption awards to score just a tenth of a point short of the record high score. Bluecoats' sixth-place show, "Imagine" was inspired by the 1971 John Lennon song of the same name, recorded a year after the release of the last Beatles album, "Let It Be." The song, released on an album of the same name, was the best-selling single of Lennon's venture into solo recording, remarkable considering it was written during one session at a bedroom piano. "Imagine" speaks of a world at peace, unencumbered by the elements that divide people. Lennon claimed the song was inspired by a poem written by his wife, Yoko Ono, which appeared in a book published in 1964. Lennon considered the song to be a positive prayer, somewhat inspired by a Christian prayer book presented to him by social activist Dick Gregory. Although some have felt the line, "And no religion too," meant Lennon was against religion, he claimed that he was simply opposed to the boasting that one religion was superior to any other. Like the song, Bluecoats' production expressed the belief that global harmony is attainable, but only if we let go of the things that restrain us from seeing the rest of the world as we see ourselves. The corps created a storyline about a man who went through life with no passion for anything other than a day-to-day existence, not heeding the proverb that a life without imagination is a life not fully lived. However, he stumbled upon a world, unbeknownst to him, of his own making. It was a world where people lived for the moment and freely expressed themselves. After those first few moments of Lennon's anthem, the opener of "Children's Hour of Dream" took over with the darkened musings of string bass player and composer Charles Mingus, Jr., who combined many contrasting musical influences into a style uniquely his own. The piece was released on Mingus' "Epitaph" album of 1962, a massive two-hour suite written for 31 musicians. It was unusual as a jazz work, featuring two pianists, two bassists, and two symphonic percussionists in addition to the drummer, as well as a bassoon, contrabass clarinet and tuba. 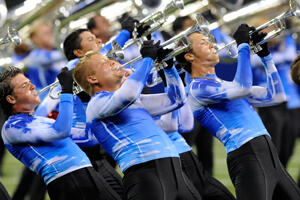 2009 Bluecoats
As the corps unveiled the piece, the featured protagonist began his path to enlightenment. Coming onto the field dressed quite nattily in a suit, tie and bowler hat, and carrying a red umbrella to protect himself from the elements (and perhaps the freedom of self-expression), he was soon stripped of his tie and jacket while being introduced to the people who inhabited the world of whimsy, bizarreness and wonder. In lieu of his suit jacket was now a costume top like that worn by the color guard members, representing the first of the new world's inhabitants that made contact with him and started him on his path of enlightenment. Like many of the visual aesthetic cues in the show, the design of those tops were inspired by Belgian surrealist artist Rene Magritte, famed for painting ordinary objects in unusual circumstances. The inside of the protagonist's umbrella was, like the guard tops, reflective of the cloud scenes that appeared in many of Magritte's works. As the opener concluded, a single flag was unveiled, emblazoned with an incandescent light bulb and the word, "idea." Bluecoats played Gordon Goodwin's "Hunting Wabbits" in their 2004 production originally written for "XXL," Goodwin's Big Phat Band jazz recording of 2003. The piece is humorously inspired by the children's cartoon where Elmer Fudd continuously attempted but failed to catch and kill Bugs Bunny. Its success prompted Goodwin to write "Hunting Wabbits 2 (A Bad Hare Day)" for his 2006 album, "The Phat Pack." This quirky piece represented the new world of whimsy, complete with pastel flags showing flying pigs. At the end, the "idea" flag was brought back, but another flag reading "Big" now preceded it. Maria Schneider, like Goodwin, is a composer and big band leader. Her ballad, "Sky Blue," is from her 2007 album of the same name. The album was released via ArtistShare, a website that allows creative artists to fund their projects via financial support from fans and other interested parties. As was her earlier album from 2004, "Concert in the Garden," this album was originally sold solely through the Internet prior to being released on CD. 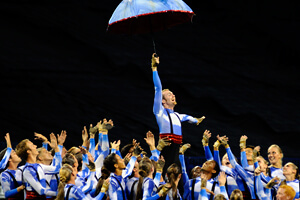 2009 Bluecoats
This work, a lovely repose from all the new stimuli of the new world, demonstrated members leaning on each other for physical and mental support. As the piece progressed, the corps' uniform jackets were gradually removed to reveal the cloud attire worn by the guard. At the end, another flag was added to the previous two word flags during a hint of the Lennon melody, with the three flags now united to read, "Bigger idea." The show's closer was "Haitian Fight Song," from the 1957 Charles Mingus swing album, "The Clown." It was originally written for a small jazz combo of five musicians, plus improvised narration by Jean Sheperd. (Shepherd may be best known as the writer and narrator for the annual Christmas film classic, "A Christmas Story.") Mingus stated the piece, imbued with sadness, ended with a sense of determination. By the start of the piece, everyone in the corps was wearing the quite informal cloud tops, with no hats, reveling in the loss of inhibitions along with the uniforms. Order and geometric forms gave way to more abstract movement and the earlier subdued flag colors were replaced with vividly bold reds and purples. The two side field conductors ran to the main podium and removed the gauntlets and uniform jacket of the drum major as the corps launched into an enthused reprise of Lennon's "Imagine." The show's protagonist ran onto the field with a new umbrella that had Magritte's cloud motif emblazoned on the top. This was significant as earlier the design was on the bottom of the umbrella, purposely restricted to a minor glimpse here and there, waiting to be freed from the boundaries earlier set upon it. During the final long chord, the entire horn line motioned the audience to join them, reflecting the ending lyrics of Lennon's plea, "I hope someday you will join us/And the world will live as one."