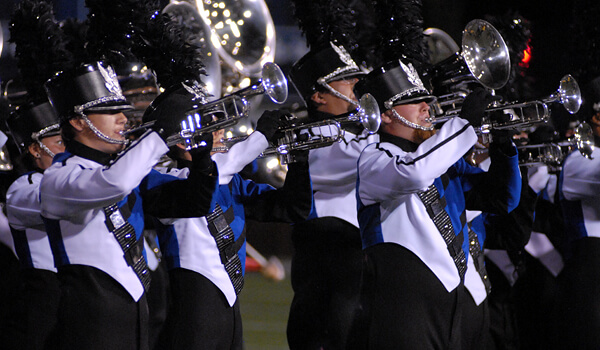 2011 Blue Devils B
The end of the 2011 Drum Corps International Tour marked the first time that both the Open Class DCI World Championship Prelims and Finals were held over two days at the inviting confines of Ames Field in Michigan City, Ind. Due to a rainstorm after only two corps performed on the day of the Prelims, all corps had to be slated to compete as part of the Finals the next day. The 2011 Open Class World Champion Blue Devils B came within seventh tenths of a point of having an undefeated season, edged by Oregon Crusaders the first week of August in Erie, Pa. In Michigan City, the Crusaders came within three tenths of a point of capturing the corps' first World Championship title, with Vanguard Cadets only a half a point behind. Spartans, building upon the previous year's successful return after a year off, captured 4th place with the highest color guard score, followed by two corps from Texas, Revolution and Genesis. 7th Regiment, Music City, Legends, Raiders, Forte and the Colt Cadets represented the other finalist corps, with international corps Yokohama Scouts (Japan) and Jubal (the Netherlands) also competing. Once competition was completed in Michigan City, there was still much excitement in store for all the Open Class corps. A journey down the road to Indianapolis witnessed each of the above corps, plus Les Stentors, Racine Scouts, Blue Saints and Spirit of New Jersey, perform head-to-head against their World Class counterparts. Three of those corps—Blue Devils B, Oregon Crusaders and Vanguard Cadets—proved not only to be up to the challenge, but placed high enough to advance to the Semifinals the next day. "Synchronicity," the title of Blue Devils B's production, was inspired by the album of the same name by The Police, the three-member band fronted by Sting before he embarked on his stunningly successful solo career. It was the fifth and final album by the band, released in 1983, and is best remembered for the smash hit, "Every Breath You Take." The album won the Grammy Award for Best Rock Performance by a Duo or Group with Vocal, and was noted for displacing Michael Jackson's "Thriller" as the number one album in the United States. The show, like the album, started with "Synchronicity I," a song with lyrics referencing a poem by William Butler Yeats that referred to Jung's theory of the collective unconscious, which explores the accumulative power of the unconscious selves of multitudes of people. The corps casually walked onto the field from the left side to the rumbling of the front ensemble, followed by an introduction of the various members of the drum line. The brass section entered with the repetitive sequencer line that runs through the original piece, gradually adding more instruments to the big hit. This was accented visually by color guard members spinning flags that may have been inspired by the work of Dutch painter Piet Mondrian. As seen throughout the show, the corps demonstrated a remarkable control of playing while spreading across the entire field, leading into a ballad of "Kaleidoscope Heart." The piece was the first track—clocking in at just one-minute long—from the album of the same name by Sara Bareilles. This third album by the singer-songwriter was released less than a year before Blue Devils B's show. 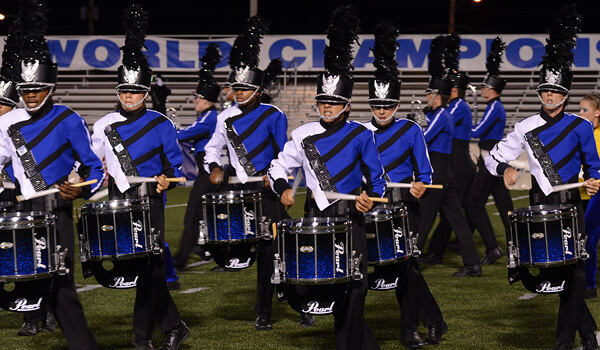 2011 Blue Devils B
Next up, evolving out of the Bareilles piece, was "Murder by Numbers" by Sting, also from the "Synchronicity" album. The brass hammered out the bluesy melody like a lounge singer pouring his heart out to the audience. "Krump," by Baylor University professor Scott McAllister, directly evolved from the Sting piece. "Krumping" is a form of urban dance known for its exaggerated movements, though such movements were not part of the corps' visual offering. After the segment that served as the percussion feature, the corps' "Battle Dance" section brought in the brass players to present a threatening mood, accented by the sound of a marching machine. This percussion equipment in the front ensemble is a series of wooden blocks suspended by strings that pass through holes on each side of the rectangular pieces. When the board upon which the blocks is moved up and down it creates the sound of an army marching in step. The show wrapped up with a very brief glimpse of "Synchronicity II" by Sting and a few measures of original, untitled music by John Meehan, the corps' brass arranger and brass caption head, ending the largely rock-oriented show with a passionate frenzy of mass elation.

For this week only, you can save on the DVD that contains this complete Blue Devils B performance, along with all of Open Class finalists at the 2011 DCI World Championships.