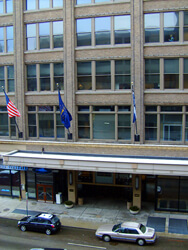 The new DCI HQ at 30 S. Meridian
in downtown Indianapolis.
In August of 2006, Drum Corps International announced that in addition to moving its World Championship events to Indianapolis, Ind. for the next 10 years, it also would relocate its headquarters there. Now, a year and a half later, Drum Corps International's new downtown Indy offices opened their doors for the first time this week. Community members and local organizations enthusiastically greeted DCI staff members during their first days operating in the Circle City. Event Operations Manager, Missy Berg explained, "It was very welcoming to have so many community organizations stop by and visit with us. Having produced events here for so many years, the city already had a 'home-like' feel to it. Now, that feeling is already becoming more deeply-rooted. This is truly exciting." DCI Operations Manager Ric Oberlin added, "The logistics for this move were laid out many months before and have been closely followed. After 36 years in the Chicagoland area, this has been a big step for Marching Music's Major League." Check out these scenes from the former DCI headquarters in Addison, Ill. during the final stages of last week's move. View the photo gallery.