Approximately 100 European DCI fans met recently in Dadizele, Belgium, to watch the 2003 Division I DVDs on a big-screen television and to hear Bruce Vrancken, a Blue Devils player from Belgium, share his experiences. 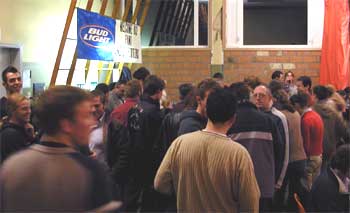 A photo of the gathering in Belgium. The sign in the back reads, 'Welcome DCI fans and supporters.'
Sponsored by the Belgium corps Dadizele, the group "evaluated corps shows and exchanged many impressions and plans for the upcoming corps season," according to François Deschacht, who attended the gathering. Deschacht said that Vranken's presentation was a particular highlight of the evening. Vrancken "came to talk about his step in to drum corps, and his lifetime experience in the drum corps activity. He even showed his DCI champion 2003 Blue Devils ring. Visitors ... were impressed," Deschacht said.