Alfred "Corky" Fabrizio and Don Porter have been elected to the Drum Corps International Hall of Fame by the Hall of Fame Legacy Committee. Alfred "Corky" Fabrizio is a drum corps journeyman whose drum corps career spanned multiple decades, and who served as a performer, instructor, arranger, adjudicator and show coordinator in those years. Fabrizio played with and/or instructed and arranged brass for 16 drum corps around the country, from the Cadets of Greece to the Alpine Girls to the Cavaliers. He was also schoolteacher for 37 years. 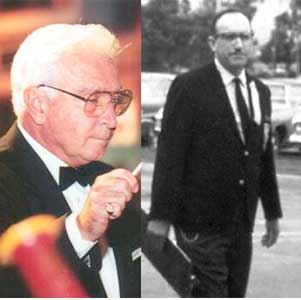 Alfred "Corky" Fabrizio (left) and Don Porter.
"Mr. Fabrizio has been an important part of the drum corps and DCI arena for decades. Not only has he taught, composed, arranged and judged, but he has been on numerous committees for redesigning judging sheets in several stated, developing and starting marching band and drum corps circuits and training fellow adjudicators," said Beth Fabrizio, Corky's daughter, in Fabrizio's hall of fame nomination letter. Dave Richards, also a DCI Hall of Famer, noted Fabrizio's many talents in a hall of fame nomination letter. "He is one of a very few that has touched the activity as a performer, instructor, arranger, adjudicator, show coordinator -- and achieved success and greatness in every capacity," Richards said. Don Porter, a former naval officer and aerospace engineer, took over what would eventually become the Anaheim Kingsmen in 1963. In the pre-DCI era, Porter lead the Kingsmen to an American Legion and Veterans of Foreign Wars (VFW) California State Championships in 1966. Porter directed the Anaheim Kingsmen until 1972. "Although he was highly successful in dealing with Southern California's power elite, he is best remembered by those who knew him for his ability to recruit, organize, manage and motivate parents and other volunteers," said William Borges in Porter's hall of fame nomination letter. Borges was the first drum major of the Kingsmen. Nominator Robert Schroeder noted Porter's wisdom in his hall of fame nomination letter for Porter. "He was well-respected by his peers within the drum corps community. On many occasions, he willingly provided counsel and assistance to managers of other corps who sought his advice, several who also have been inducted in the Hall of Fame," Schroeder said. Porter, who passed away in 1998, is being inducted posthumously. The Legacy Committee of the DCI board recognizes that those who have been away from the activity for several years may not be well known to current members of the board and hall of fame members, and DCI does not want those persons disadvantaged through the regular election process. Fabrizio and Porter will be recognized as a new member of the Hall of Fame during 2006 finals week, and will be officially inducted during the DCI board of directors meeting in January, 2007.