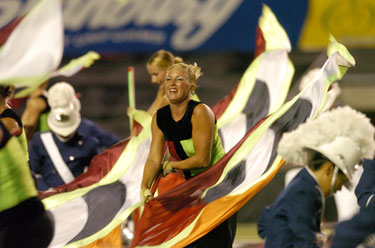 Bluecoats' color guard in action at the 2006 DCI World Championship Finals.
Fairbanks is well known in the drum corps activity for his role as the visual mastermind behind the RhythmX indoor percussion ensemble from Columbus, Ohio, a perennial competitor for the WGI indoor percussion world championship. Although 2007 will be Valentine's third season with the Bluecoats, this will be his first year as a member of the design team. He began his color guard career performing with the Infiniti winter guard and Carolina Crown. Read more on www.bluecoats.com