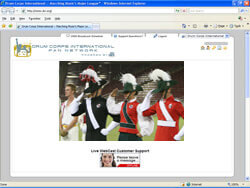 The Drum Corps International Fan Network continues with its series of Live Webcasts this evening with coverage of the DCI West Championship from Stanford, Calif. You'll be able to experience all of the heart-pounding action from Stanford Stadium right as it happens…alongside thousands of fans packing the stadium seats.

Tonight's Webcast can be purchased on a pay-per-view basis for only $14.95, but gain access to ALL Webcast events and more for the low Fan Network subscription price of $69.

Tonight's DCI West Championship features a lineup of 11 corps including:

OnDemand playback of the DCI West Championship will be available to Fan Network subscribers following the event giving you the chance to watch all of tonight's corps, whenever you want. Also recorded tonight from the Midwest will be the DCI Kalamazoo event, made available for OnDemand viewing by July 7.

Watch all 2008 Live Webcasts by subscribing as a member of the DCI Fan network.