The 2009 Drum Corps International Tour is getting more and more exciting as corps continue to travel the country, presenting their breathtaking shows at more than 100 events in nearly 40 states. Whether long-time supporters or first-timers, no DCI event would be complete without the excited and sometimes eccentric fans from around the country who come out to support their favorite corps. Don't miss a second of the exciting action from the world's most elite marching music ensembles—join these extraordinary fans at the next DCI event near you! View the complete 2009 DCI tour schedule. 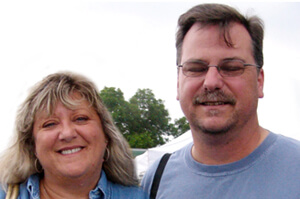 Bob and Mellanie Griffis from Dalton, Ga., drove more than 700 miles to see their son, Bobby, perform with Spirit at the Rockford, Ill. Show of Shows on June 19. Bobby, who also marches as a member of the Jacksonville State University Marching Southerners, is in his fourth season with Spirit and was part of a winning mixed ensemble at the 2008 Individual & Ensemble Competition. "It's an exciting year for Spirit," said Bob. "Rock and roll on the field!" Mellanie seemed excited just to have survived the trip, but looks forward to supporting their son. Those are dedicated parents! 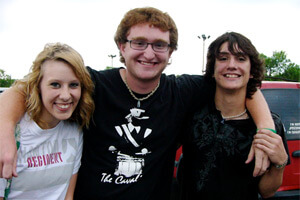 Three Kaneland High School band students from Maple Park, Ill. came to the Show of Shows as well, sporting T-shirts that showed their conflicting loyalties. Bethany, was wearing a Phantom Regiment t-shirt, while Logan sported a Cavaliers shirt. Bethany's brother Joey, 14, wore a bracelet supporting the Cavaliers as well. Outnumbered, Bethany says she had to support Phantom after "seeing the light" last year. Logan enjoys Phantom as well, but finds the Cavaliers more his style for their visuals and attitude. Joey was attending his very first drum corps show. 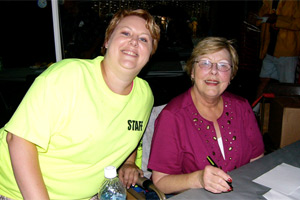 At the VIP tent, mother/daughter team Rebecca Sopewell ('85-'91 Phantom Regiment color guard) and mom Linda Riebock (Phantom Regiment nurse for 12 years) greeted guests, handed out programs and gave out the latest weather info while trying to hold down the tent, which threatened to fly away in the impending storm. A second daughter, Sarah Whitlock, is currently working with the Colts. 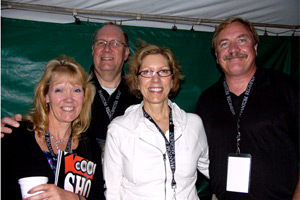 Also in the VIP tent were Father Jim, his sister (in white) and two friends. Father Jim has supported drum corps for years even, touring with the Santa Clara Vanguard souvenir operation. While he will miss this year's World Championship Finals in order to officiate at a friend's wedding, he'll still make it Indianapolis, Ind. on Aug. 6 for the World Championship Quarterfinals.