The Fastest Drummer contest proved to be one of the main attractions today during the solo and ensemble competition. Drummers from all over gathered to see who could stick the most beats in one minute. A meter hooked up to a practice pad measured every time the stick hits the surface. Both corps members and non members could take a stab at it for $3 a try. One member even went twice to defend his standings. 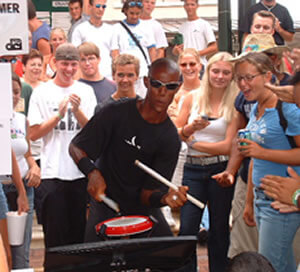 Walter Turner III is a snare drummer for the Blue Knights. He took a crack at the fastest drummer contest today in front of a fairly large crowd. "It was awesome! I wasn't too warm because I played my solo over an hour ago. I really tried to get a lot of crowd reaction - it was a lot of fun!" he said. Turner said he had never been in a fastest drummer contest before. "We always heard about it but never did it. This year my friends convinced me." He finished with 881 beats in one minute. The highest at that time was 897. "When I get warm I'll take another chance at it," he said. Turner said this is the time of season he enjoys the most. "Over the last couple of days the drum line has reached a nice solid level and we are playing some clean beats."