This picture is from Stephanie West, a 2006 member of Phantom Regiment. 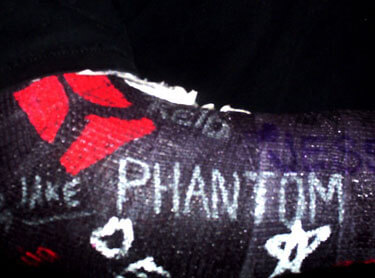 Well this is my cast now. My name is Stephanie and I marched as a member of Phantom Regiment last summer. I had some pain about two weeks before the summer ended in my right wrist. Apparently, I was born with a long forearm bone and tore most of the ligaments in my wrist. The surgery went well and I was told that I wasn't going to be able to play for six months. But since my last doctor visit, I was told I could play in two-and-a-half months.

Hooray! Now I am able to march my age-out summer. When I went back for a rehearsal camp, the pit wanted to sign my cast. Jake drew the Phantom symbol to top it off! Just thought that I would share the Phantom love.