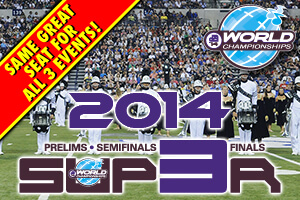 The Drum Corps International World Championships will return to Indianapolis in August of 2014, and ticket packages giving you access to all three days of competition are currently available but only until Wednesday, Oct. 30.

2014 will mark the sixth straight year of World Championship events at Lucas Oil Stadium, and DCI's Super 3 ticket packages will put you in some of the best seats in the house for all of the exciting action taking place in Downtown Indianapolis. Events include:

ACT TODAY: Super 3 orders must be processed through the mail, and your order must be postmarked by this coming Wednesday, Oct. 30.