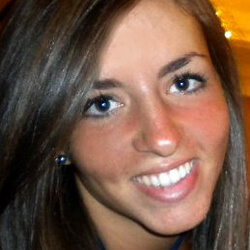 Eliza Davis
Eliza Davis, 20 Indiana University Bluecoats Baritone & Euphonium Section 2009-2011 What do you think is important in choosing which corps to audition for? I strongly suggest going to shows to watch corps perform. The first show I attended was the World Championship Quarterfinals in 2008. As soon as the Bluecoats walked on the field, I knew by the way the members carried themselves and by the overall effect of the performance that I wanted to march with them. I also suggest researching a bit about the corps and their past productions. Knowing what many of their shows have been like in the past can help you decide what kind of corps you want to be a part of. How do you like to prepare for an audition? While preparing for my first audition I practiced the audition material as well as several helpful exercises nearly every day for about an hour. I also performed the pieces in front of my peers to get used to playing in front of others. Additionally I kept a healthy lifestyle and worked out on a daily basis to be physically fit come the audition. What was your experience like the first time you auditioned for a corps? Because I was so young when I first auditioned, I was incredibly overwhelmed and didn't think I would be able to continue with the drum corps activity. However, members of the corps were very welcoming and convinced me to push through those awkward stages while reassuring me that I would love my experience during the summer, and I did! What advice would you give to somebody who is nervous or unsure about auditioning? You will never know until you try. It is completely normal to be nervous, but try to be outgoing with the people around you. I didn't talk to anyone at my first two rehearsal camps and didn't have the best time. At my third camp, I decided to open up and realized how much I was really going to love it. Any other tips? When deciding whether or not I was ready to join a corps, I thought about how I would feel if I saw the corps perform at a show, knowing that I could be doing that. There are VERY few people who hate their summer in a drum corps. Most people find friends and a new family with their corps. Performing in this activity is by far the best decision I have ever made. I have truly grown as a person and a musician through the entire process and would not trade the experience for anything. Learn more about corps audition dates, locations and additional info.