By Krista Miller, kristam@vt.edu He put his hand flat up against the glass wall between us as I waited at the gate. A small tear fell as I smiled at him, and I put my hand on the glass where his hand was. The lady sitting against the wall flashed me a smile. That moment was just like the Toledo show, when we talked on cell phones separated by a piece of glass. At that moment so many summer memories came flooding back to me. 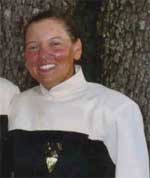