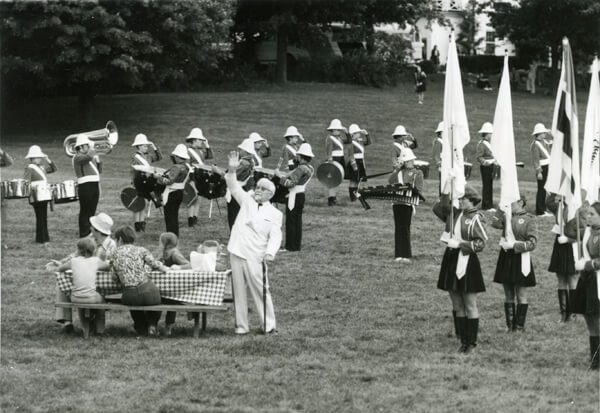 In 1975 the Guardsmen shared the small screen with Kentucky Fried Chicken's Col. Sanders in a nationally televised commercial for the fast food chain.

According to Guardsmen fan site iraare.org:

The corps was contacted by the Leo Burnett Advertising Agency to star in a Kentucky Fried Chicken commercial. The agency's representatives said the orange color of the Guardsmen uniforms complimented the color scheme of the company and, when a commercial was written that featured a "marching band," the Guardsmen Drum and Bugle Corps was a perfect choice.

On a tree-lined estate in Barrington Hills, IL, the corps spent two days in the hot sun running drill sets over and over again to perfect the moves needed for the advertisement. All eyes were on Col. Sanders as he signed one of the corps' bass drums after the filming was complete.

Featured on national television, the commercials aired in 15-, 30- and 60-second time slots. Most of the members used the small checks they received for performing to help with dues that year. The actors who starred in the commercial received significantly more!