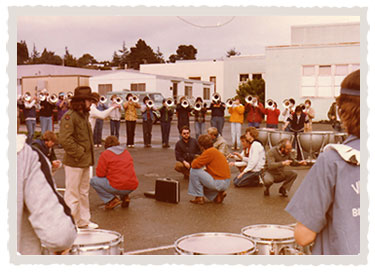 I took this photo at a Blue Devils rehearsal camp in 1981. We were learning Don Ellis' "Pussy Wiggle Stomp," which is a production number leading into our percussion solo. It was later replaced by the Indian-influenced and much more sophisticated "La Danse du Bonheur." Our cymbal, timpani and mallet tech, Tom Nanni, an all-around amazing percussionist, brought the song to Blue Devils. In recalling the original piece of music, it was the first time I ever heard vocal percussion as song. It was rhythmically very difficult.

On timpani is Tom Wieske. Tom was one of the first musicians to play a grounded percussion instrument.